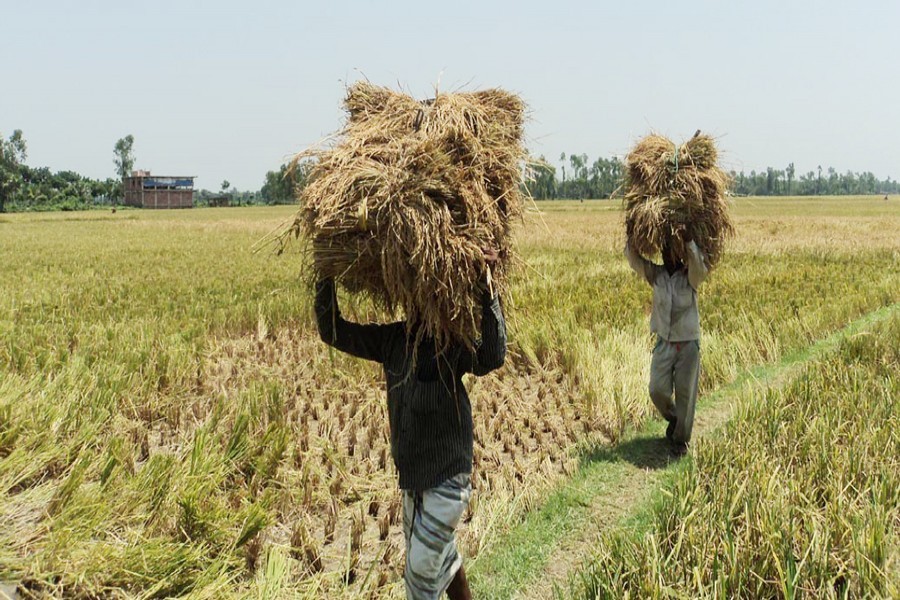 The country's farmers have plunged into a deep despair, as prices of both rice and paddy have started declining with the beginning of Boro harvest in full swing.

Millers and traders are now on the prowl to take hold of the rice market during this pandemic, which is causing the recent price decline, said market observers.

They said the government should introduce a market mechanism, so that the farmers can make profit and continue farming, which is now obligatory for ensuring the country's food security.

All the rice varieties witnessed a Tk 150-160 price fall (per 50 kg sack) in Rangpur, Dinajpur, Bogura, Naogaon, Pabna, Kushtia and Jashore milling hubs in last one week, according to the Department of Agricultural Marketing (DAM).

Prices of paddy also showed a notable decline, as older paddy of last season was selling at Tk 780-1,250 a maund, based on varieties, showing Tk 200-250 decline at per maund, DAM data showed.

The Trading Corporation of Bangladesh (TCB) also recorded a Tk 2.0-3.0 a kg price fall in Boro season rice varieties, like Miniket and Brridhan-28, in last one week in the city.

However, newly harvested paddy is yet to hit local agricultural market across the country in a large volume, except in haor and other lowland regions.

The government's Boro crop procurement drive started two weeks back. But paddy prices fell to just Tk 620-680 a maund in haor region against the government set price of Tk 1,040 (Tk 26 a kg) a maund.

Department of Agriculture Extension (DAE) data showed production cost of paddy was Tk 820-900 a maund in haor areas in this Boro season.

Harvest of 95 per cent of land, out of 0.9 million hectares, in the haor region under five districts, have completed.

The overall harvesting in the country was 28 per cent until May 07, according to DAE.

In other regions, paddy harvest has just begun, and the new crop is selling at Tk 720-750 a maund, much below the production cost of Tk 850-960 a kg, according to DAM.

The government's paddy, rice and wheat procurement has started in the country with an aim to purchase 2.04 million tonnes of grains from farmers and millers.

Paddy weighing 800,000 tonnes and wheat 750,000 tonnes will be bought directly from the farmers, while 1.15 million tonnes of rice from the millers between April and August.

Md Shakil, a farmer at Charaikhola union in Nilphamari sadar, told the FT that he has harvested paddy on his five bighas of land.

"I have spent Tk 105,000 so far to grow paddy on my five bighas of land amid surge in labourer and irrigation costs."

The total harvest will be completed by May 20, and he is expecting 125-130 maunds of paddy.

He also said prices of paddy and rice have started falling in his area, raising concern among farmers.

They need at least Tk 880 for per maund of paddy, which could give them some profit.

They need money immediately after the harvest to pay back their dues to sellers of fertilisers, seeds and pesticides as well as to NGOs.

"If this falling trend in paddy prices continues, we will incur loss and many of us will not go for Aman cultivation," he added.

Monowar Hossain, a farmer at Tegulia Beel under Nikli upazila in Kishoreganj district, said he sold paddy, produced on his three bighas of land, just at Tk 640 a maund last week after failing to register himself in the government procurement list.

He also said 8-10 per cent (of the total) lucky farmers were included in the list. The rest of the farmers are forced to sell paddy at low rates, as they need money now.

He claimed that the farmers will make good profit in this season, as overall acreage has declined as per calculation.

The government is expecting 20.04 million tonnes of rice in this Boro season from 4.75 million hectares of land.

Last year, the production was 20.03 million tonnes from 4.82 million hectares, according to DAE.

The farmers have completed their job by producing a huge volume of rice despite having all odds.

Now it is the time for the government to ensure their profit, so that they can continue farming, which is now obligatory during the pandemic, he opined.

The government should declare procurement of 10.0 million tonnes of grains this year from farmers instead of 2.0 million tonnes to tackle any possible food crisis, following rocketing prices of rice and wheat in the global market, induced by the coronavirus pandemic.

In that case, the farmers themselves can store crops at their homes amid lack of enough storage capacity of the government, in line with a mechanism practiced in some provinces of neighbouring India, he noted.