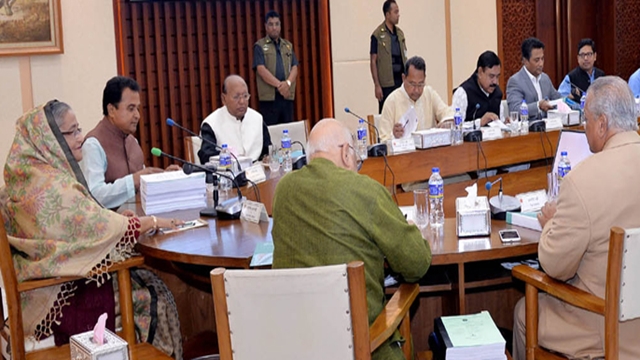 The Executive Committee of the National Economic Council (ECNEC) on Tuesday approved a project involving Taka 607.16 crore for excavating and re-excavating major canals in the capital in order to address city's vexing water logging.

It was endorsed at the 21st ECNEC meeting of the current fiscal year (FY18) held at the NEC conference room in the city's Sher-e-Bangla Nagar area with ECNEC Chairperson and Prime Minister Sheikh Hasina in the chair.

A total of 10 projects were approved yesterday with an overall estimated cost of Taka 3,415.86 crore. Of the total project costs, Taka 3,400.93 crore will come from the government exchequer while the rest of Taka 14.93 crore from the organisation's own fund." Planning Minister AHM Mustafa Kamal said while briefing the reporters after the meeting.

Of the approved 10 projects, nine are new while one is revised project.

The Planning Minister said the project would be implemented by December 2019 and the entire project cost would be borne from the state coffer.

"The main objective of the project is to address the traffic jam and water logging of the capital through keeping the usual flow of water in the canals during the rainy season and thus ensuring a healthy and environment-friendly living atmosphere for the city dwellers.

According to the Dhaka WASA, the drainage system of the capital consists of 151-kilometre long 51 canals, 10-kilometre long box culverts, and thousands of kilometre long pipelines operated by various agencies.

The main operations of the project include some 30.562 acres of land acquisition- 4.355 acres for Hazaribagh canal, 6.385 acres for Baishteki and Journalists' colony canal, 4.613 acres for Kurmitola canal, 1.905 acres for Begunbari canal, 13.304 acres for Manda canal and compensation to the establishments, construction of 0.15 kilometer road crossing culverts, 13.50 kilometre canal excavation, and erection of some 2,200 pillars.

Prior to the approval of the project, Bangladesh Air Force has requested the Dhaka WASA to address the water logging in Kurmitola area, Hazrat Shajalal International Airport and adjacent areas.

Under the present circumstances, the project has been approved to conduct excavation and re-excavation works at five canals - Hazaribagh canal, Baishteki canal, Kurmitola, Manda canal and Begunbari canal.

The day's ECNEC meeting approved another project for widening the Elenga- Jamalpur highway with Taka 489.82 crore. The Roads and Highways Division will implement the project to upgrade some 77.60 kilometre highway into four-lane by June 2020. This four-lane highway will go through Elenga, Kalihati, Ghatail, Modhupur, Gopalpur, Dhonbari, Jamalpur Sadar and Sarishabari.