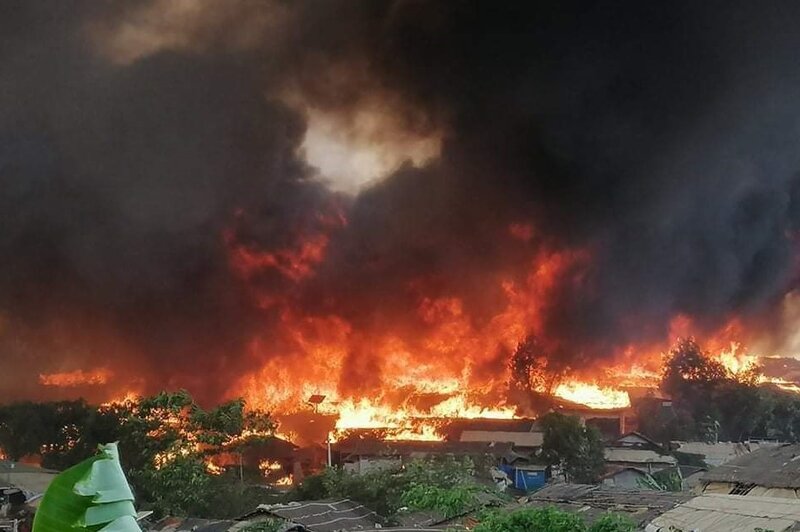 It is still unknown what caused the recent fire in the Rohingya camp. The government's investigation is still underway, and we won't know the full explanation until the investigation report is published.

Before getting a full investigative report, it would be premature to speculate about the cause of the fire, but at the very least, it is rational to raise an issue of risks. It has the potential to play a significant role in avoiding such an accident in the future.

You don't have to be a big expert to realize the deadly risks posed by the thousands of cylinders in the Rohingya camps there.

The non-governmental organization BRAC released an immediate survey report on March 22 shortly after the recent accident. In the light of the information initially collected in that report, the gas cylinder explosion has been mentioned as the onset of fire.

The New York Times also quoted an eyewitness in a report as saying that due to the gas cylinder explosion fire spread rapidly.

Newspaper pages often report gas cylinder explosions, with tragic deaths. You don't have to be a rocket scientist to see the dangers that the thousands of cylinders in the Rohingya camps pose. Shortly after the recent incident, the non-governmental group BRAC issued a quick assessment report on March 22.

In this case, a comment of Imdadul Haque, the team leader of Ukhia Fire Service is noteworthy. "Ninety percent of all fires in the camp so far have been caused by gas cylinder explosions," he said in an online newspaper.

A report published in The Daily Azadi (March 23) provided some crucial details. According to the report, Rohingya leader Master Nurul Alam said the fire would not have caused so much damage. The massive loss of cooking gas among the Rohingya is responsible for such a huge loss. Because Rohingyas are not accustomed to cooking on gas. Many people cook on a wood stove even though they have gas. Many also sell it cheaply to gas distributors. Apart from these, during the gas refill, some people bring out the gas in front of the house and refill it again.

Everyone knows more or less that many low-quality, expired gas cylinders are being sold in local shops. These cylinders are very risky. According to various sources, the Rohingyas have different types of cylinders in their houses, and there are even multiple cylinders in one house.

Almost everyone is aware that many low-quality, obsolete gas cylinders are available for purchase in local stores. These cylinders are extremely dangerous. The Rohingyas, according to various sources, have various types of cylinders in their homes, and some even have multiple cylinders in one dwelling.

The time has come to consider other options. Providing fuel for such a vast population is, without a doubt, a difficult task. However, risking their lives for the sake of fuel supply is needless. Of course, there are alternatives, which I will explore in the next article.