Capital market to be in good position in couple of years: Muhith 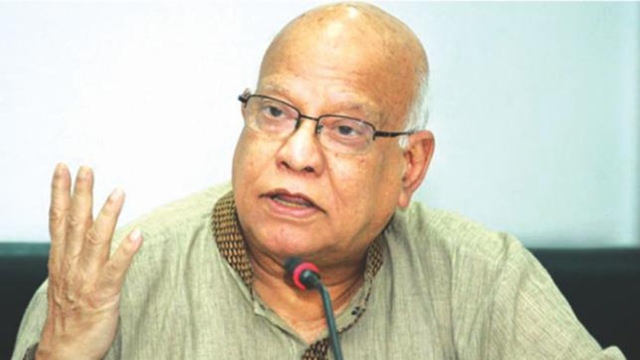 Finance Minister AMA Muhith on Tuesday said the country's capital market will go in a good position a few years and play a vital role to expedite investment by arranging necessary financing for the entrepreneurs.

"There are no scopes for large ups and downs in the capital market now as the government is working to develop the market. We have taken different reforms initiatives to take the capital market in a stable position," he said while addressing a dividend handover ceremony of the Investment Corporation of Bangladesh (ICB) at Finance Ministry in the city.

The shareholders of ICB approved 30 percent cash dividend and five percent stock dividend against each share of Taka 10 for the 2016-17 fiscal year in the 41st Annual General Meeting.

The government has got cash dividend amounting to Taka 51.26 crore and around 85.43 lakh shares as bonus against its about 1.71 crore shares.

In the function, Muhith said Bangladesh Securities and Exchange Commission (BSEC) is working for the last six years to take the capital market in a good position as the market faced a big fall six years ago.

Because of taking different initiatives through BSEC, he said, the capital market will reach in a good position in future.

Responding to a question, Muhith said, the government will not impose any Value Added Tax (VAT) on private universities, but owners of the universities will have to pay income tax from their income through the universities.

He hoped that the GDP growth will be 7.5 percent in the 2017-18 financial year, which is higher than the budgetary target of 7.40 percent.

"The Planning Commission has projected 7.65 percent GDP growth in the fiscal. But, I think that the growth will not less than 7.50 percent in the fiscal," he added.