Bangladesh to continue marching ahead under Sheikh Hasina: Matia 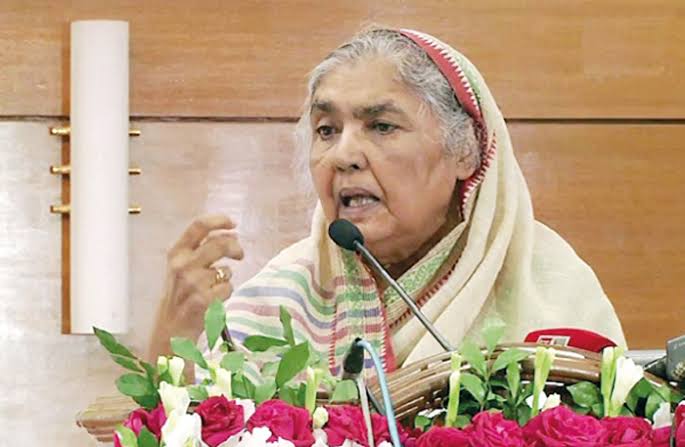 “Conspiracies are still going on. But all conspiracies will go in vain as we will obviously go ahead towards enlightenment under Sheikh Hasina’s leadership,” she said.

Matia Chowdhury said Bangabandhu’s daughter faced different troubles and attacks were carried out on her time and again but she never stopped her struggle for the welfare of the countrymen.

She hoped the premier will reach the nation towards its cherished goal to become a developed nation mentioning that Bangladesh has received the final recommendation from a UN committee for graduating to developing nation from the least developed country (LDC) status.

Abdur Rahman said Sheikh Hasina escaped 21 assassination attempts but she never stops her struggles for the welfare of the nation.

He said the premier has set an example in dealing with the coronavirus (Covid-19) situation and other disasters.

The AL Presidium member said the conspirators want to frighten Sheikh Hasina but she never fears any conspiracy.

“Per capita income reached $2227 which is an achievement for our nation,” he said.

The information minister said Bangladesh, which holds the 91st position in the world in terms of area, is now third in rice production, fourth in production of fish, seventh in potato production and fourth in vegetable production.

Mentioning that rule of law has been established in the country under the leadership of Sheikh Hasina, he said the trial of Bangabandhu’s killers were held and verdict was executed while war criminals were exposed to justice and the trial is still going on.

Dr Hasan said under the leadership of Sheikh Hasina, democracy was restored in the country from the confinement in cantonment and the people’s rights to exercise franchise and fundamental needs have been established.

He said Sheikh Hasina escaped assassination attempts again and again but didn’t give up her struggle to establish the people’s rights.

The AL joint general secretary said his party was out of the power for 21 years and they waged struggles and movements bearing unbearable pains in heart.

AL returned to power after 21 years under the leadership of Sheikh Hasina, he said adding that because of her proper leadership, AL came to power for third consecutive terms.

He urged the party leaders and workers to remain alert as conspiracies are still going on.

Dr Hasan said as plots were designed against Bangabandhu as the perpetrators failed to face him politically, in the same way conspiracies are being hatched against Sheikh Hasina.

“If Sheikh Hasina didn’t return home to hold the helm of the party as a symbol of unity and ideology, we couldn’t come here to celebrate the day with joy wearing panjabi and Mujib coat,” he said.