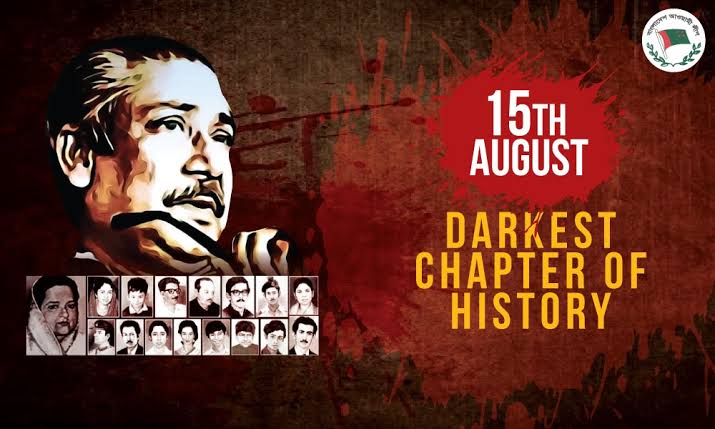 The nation is observing National Mourning Day today, commemorating the 46th anniversary of the martyrdom of Father of the Nation Bangabandhu Sheikh Mujibur Rahman.

At the fateful dawn of August 15 in 1975, a group of disgruntled army officers assassinated country’s undaunted leader Bangabandhu Sheikh Mujibur Rahman along with most of his family members and toppled his three-and-half-year-old government.

The Bangalee nation witnessed the history’s most heinous incident this day in 1975 at a time when Bangabandhu devoted himself to implementing his dream to build the country as Sonar Bangla.

The assassination of Bangabandhu dealt a major blow to the spirit of the country’s liberation war. The country witnessed politics of killing, coup and conspiracy after his assassination.

The world community strongly protested and condemned the killing of the iconic leader, saying it is an irreparable loss to millions of people of Bangladesh.

August 15 remains as a black chapter of the country’s history as the vested quarter, by capturing state power, trampled people’s long-cherished desire for economic emancipation.

After Bangabandhu’s killing, the country had been under military and quasi-military rule for 15 years. The spirit and objective of the liberation war was at jeopardy during the period.
The saga of the Bangalee nation’s long-drawn struggle for independence under the iconic leadership of Bangabandhu was nakedly twisted by the stratocracy.

Awami League led by Bangabandhu Sheikh Mujibur Rahman struggled for 24 years against the tyranny of West Pakistan inflicted on Bangalees.

As a continuation of the struggle, Awami League under the leadership of Bangabandhu Sheikh Mujibur Rahman secured a brute majority in the 1970 elections.

But the Pakistanis chose heinous tactics not to hand over power to Bangabandhu and conducted one of the history’s infamous pogroms.

Bangabandhu in the early hours of March 26 in 1971 officially proclaimed the country’s independence to rid the nation of the repression and killing of Bangalees by then Pakistani autocratic ruler. Responding to the clarion call from Bangabandhu, Bangalees stood against Pakistanis and engaged in the bloody war against Pakistani occupation forces and achieved the victory.

The nation, however, started observing the month of mourning from August 1, recalling the most brutal killing in its history and renewing the pledge to safeguard perpetually the country’s independence and sovereignty.

The government, Awami League and different socio-cultural organisations have chalked out programmes in observance of National Mourning Day with due respect and solemnity, maintaining health guidelines.

The programmes include hoisting of the national flag at half mast atop all government and non-government offices and Bangladesh missions abroad.

The day is a public holiday.

As part of the programme, the national flag will be hoisted half-mast at the buildings of all government, semi-government, autonomous, educational institutions and private offices on the day, said an official handout.

Wreaths will be placed at the portrait of Father of the Nation Bangabandhu Sheikh Mujibur Rahman in front of Bangabandhu Memorial Museum in the city.

The President and the Prime Minister paid homage to the architect of the independence by placing wreaths at the portrait of Bangabandhu in front of Bangabandhu Memorial Museum at Dhanmondi in the capital.

Floral wreaths were also placed at the graves of Bangabandhu’s martyred family members and other martyrs of August 15, 1975 at Banani Graveyard in the city.

Wreaths will be laid at the grave of Bangabandhu Sheikh Mujibur Rahman at Tungipara in Gopalganj district.

In his message, President Abdul Hamid has said August 15 is regarded as a scandalous chapter in the history of Bengali nation.

Abdul Hamid said Bangabandhu led the nation at every struggle and democratic movements including the ‘All-party State Language Action Committee’ formed to ensure the right to mother-tongue in 1948, the historic Language Movement in 1952, Juktafront Election in 1954, the movement against Martial Law in 1958, the movement against anti-people Education Commission in 1962, Six-Point Movement in 1966, Mass Upsurge in 1969 and the General Elections in 1970 all of which were directed towards realizing Bangalees` emancipation and their rights.

“For this, he had to embrace jail several times. Bangabandhu was uncompromising on the question of the rights of the Bengali nation,” he said.

As long as Bangladesh exists, the name and fame of the Father of the Nation will remain ever shining in the mind of millions of Bangalees of the country, he added.

In her message, Prime Minister Sheikh Hasina called upon all for turning the grief of the loss of Bangabandhu into strength to build a non-communal, hunger-poverty free prosperous Golden Bangladesh as dreamt by the Father of the Nation.

“Let's turn the grief of the loss of Bangabandhu into strength. Let's build a non-communal, hunger-poverty free prosperous Golden Bangladesh as dreamt by the Father of the Nation through reflecting the glory and ideals of the long struggling life of Bangabandhu Sheikh Mujib in our actions; this should be our solemn pledge on this National Mourning Day,” she said.

The premier said the anti-liberation clique killed Bangabandhu at a time when he was engaged in the struggle of building a Golden Bangladesh by reconstructing the war-ravaged nation.

The aim of the killers was to break the state structure of secular democratic Bangladesh and foil the hard-earned Independence, she said.

She said Ziaur Rahman rewarded the killers of the Father of the Nation and gave them jobs in the Bangladesh missions abroad and he gave nationality to the anti-liberation war criminals, made them partners in the state power, and rehabilitated them politically and socially by giving them lucrative business.

The subsequent illegal military government and the BNP-Jamaat alliance government followed the same path, she added.

Marking the day, the Awami League will also hold a discussion at 3:30pm at its central office on Bangabandhu Avenue tomorrow.

AL president and Prime Minister Sheikh Hasina will preside over the meeting virtually from her official residence Ganabhaban.