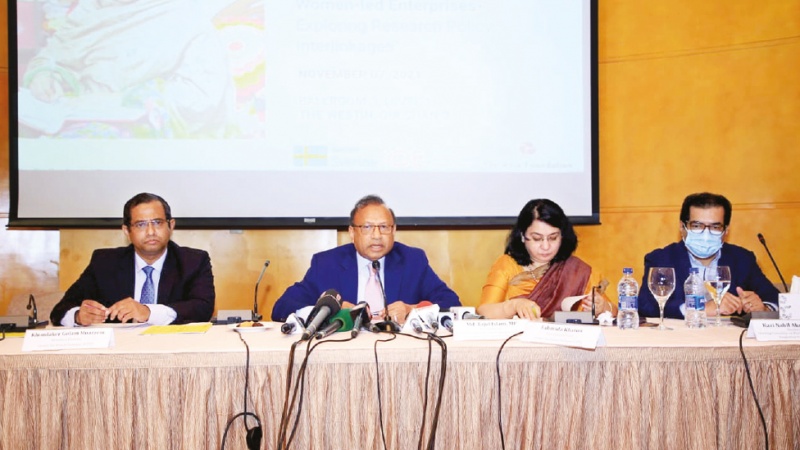 The Centre for Policy Dialogue has questioned the limited role of the research related to small and medium enterprises done by different entities during the coronavirus pandemic to tackle the situation.

The local think-tank came up with such a question while disclosing a study titled “Covid-induced stimulus packages for SMEs and Women-led enterprises: exploring research-policy interlinkages” at a city hotel on Sunday.

The CPD arranged the discussion in a partnership with the Asia Foundation.

Dr Moazzem said due to lack of sufficient guidance from the policymakers in case of selecting borrowers, the packages have been made broad-based covering all the small and medium enterprises.

“Thus, a number of challenges emerged in the selection process such as lack in specification of area, gender and racial issues,” he observed, adding that their study aimed to examine the relationship between public policies and research during the period of the pandemic.

Speaking as chief guest, Local Government, Rural Development and Cooperatives Minister Md Tazul Islam said the government was appreciated in the world for taking a good number of initiatives to overcome the Covid-19 fallout.

“The economy of the entire world including European countries has witnessed a fragile situation during the pandemic but Bangladesh’s economic growth still remains steady, thanks to our government’s timely steps,” he said.

Tazul said, “As the government announced various incentives packages for 28 sectors including garments, the private sector was able to quickly overcome the negative impact of the pandemic.

“We have provided the incentives irrespective of all small and medium entrepreneurs, workers of different sectors including apparel, leather, health as well as other poor people of the country,” added the minister.

The minister also urged all to work together to build a developed country by 2041.

Deputy general manager of Department of Financial Institutions and Market at Bangladesh Bank Liza Fahmida said, “The central Bank is aligned with the government’s strong determination to provide robust support in tackling the impacts of the pandemic.”

“Banks and financial institutions have been providing working capital loans under the stimulus package announced by the Prime Minister since 2020, and have provided at least five per cent of the stimulus packages to the women entrepreneurs this year,” she said.

She noted that there is a need for the extension of the loan repayment period.

Professor of Economics Department at Dhaka University Dr Sayema H Bidisha said, “There is lack of information, market availability, and connectivity with the support chain.”

Ambassador of Sweden to Bangladesh Alexandra BergVon Linde said, “The overarching objectives of the project include the increase of female participation in the labour force and overcoming policy-related challenges in light of Covid’s impacts on the marginalised group.”

A member of the Standing Committee on the Ministry of Foreign Affairs Kazi Nabil Ahmed ensured that more effective policy actions will be made in view of this emerging situation. Country Representative of The Asia Foundation, Bangladesh Kazi Faisal Bin Seraj delivered the introductory remarks while DU professor Dr M Abu Eusuf spoke on this occasion. Besides, associate director (Programs) at iDE Bangladesh Saroja Thapa gave the vote of thanks.