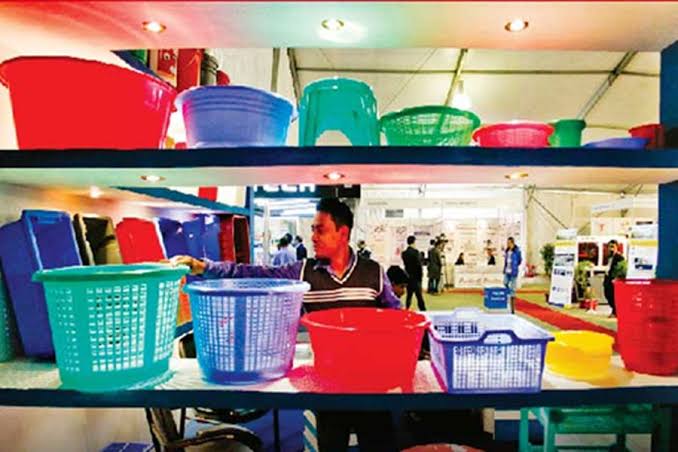 The country's plastic manufacturing sector has been maintaining a steady growth over the years against the backdrop of growing demand for plastic products in domestic and international markets, according to the sector insiders.

Moreover, export earnings from the sector have increased despite the Covid-19 pandemic because of utilising the potentials of international market by supplying on-demand products like personal protective equipment (PPE), they said.

According to the Bangladesh Plastic Goods Manufacturers' and Exporters' Association (BPGMEA), the sector's export earnings increased by 15 percent in fiscal year (FY) 2020-21. During the period, Bangladesh earned US$ 115.28 million from export of plastic products, which was higher from $100.52 million in FY 2019-20.

The BPGMEA officials said the export earnings, direct and deemed, from plastic products is estimated at $1.0 billion a year. They also said the sector is playing an important role in the economy as a backward linkage industry.

At present, the local market size of plastic products is more than Tk 350 billion. The sector is growing at the rate of 20 per cent yearly.

Shamim Ahmed, president of the BPGMEA, said if the sector gets necessary facilities, it would expand fast.

To this effect, he sought supports like tax holiday and inter-bond transfer facilities.

The position of the plastic sector in terms of export earnings is 12th in the country. If the deemed export is counted, the sector would acquire sixth place.

The association has requested the Export Promotion Bureau (EPB) to maintain the data of deemed exports of plastic products. But the bureau is yet to start it.

The EPB data showed that export earnings from the plastic sector increased gradually in the last 10 years in Bangladesh.

Besides, the EPB statistics showed export earnings from the sector rose by more than 29 percent in the July-October period of current FY.

However, the manufacturers said Bangladesh's share in the global market is still insignificant, as the size of international market of plastic products is $546 billion to $600 billion. Currently, Bangladesh contributes only 0.01 percent to the global market.

China, the US and the EU are in the leading positions in the global market with plastic products. The market shares of China, the EU, the US, and Japan are 24 percent, 20 per cent, 19.4 percent, and 4.4 percent respectively. Asia captured 16.4 percent of the international market, while Middle-East and Africa 7.3 percent, and Latin America 4.8 percent.

"Bangladesh is working to achieve 3.0 per cent market share in the coming days," said Shamim Ahmed.

The current consumption of plastic products is six kg to seven kg per person in the country. But the use of plastic in other countries, including the developed ones, is 50 kg to 150 kg.

There is a possibility to increase the consumption of plastic products in Bangladesh. To this effect, the trade-body prepared the Plastic Sector Roadmap 2030 that targeted to raise the local use of plastic to 35 kg per person by 2030, the BPGMEA president mentioned.

Bangladesh's plastic products are getting popularity day by day in global market alongside local market.

He also called for taking initiatives to get back the Generalised System of Preferences (GSP) facility, as the country's plastic sector was impacted due to withdrawal of the benefit by the US.

Figures available with the BPGMEA showed that about 5,030 small, medium and large plastic goods manufacturing units are operating in the country. More than 1.2 million people are engaged in this sector.

The BPGMEA has about 2,300 members. Of them, 500 are exporting products abroad.