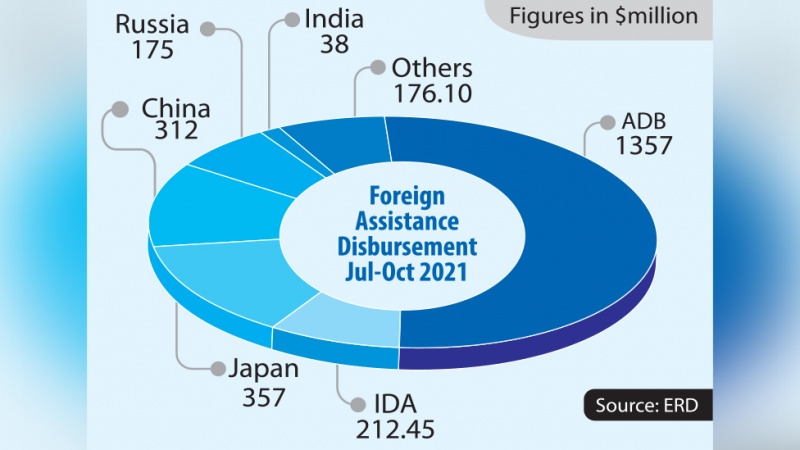 The inflow of foreign aid has significantly risen by 53.21 percent to $2.62 billion in the first four months of the current fiscal as the development works are getting pace after the pandemic has died down.

The major international development partners have released $2.62 billion in loans and grants from July to October of the current fiscal which was $ 1.71 billion in the same period a year ago, according to a report prepared by the Economic Relations Division (ERD) of the Finance Ministry.

The report showed that the disbursement of foreign aid has increased to $ 915.18 million in the first four months of this fiscal compared to the same period of the last fiscal.

Of the total aid, $2.62 billion was released during July-October of the ongoing financial year. The development partners disbursed $2.55 billion in loans and $75.13 million in grants, the ERD data showed.

The data also reflects that the development allies have made an assistance commitment of $ 2.76 billion in loans and grants from this July to October which has also increased by $ 1.53 billion compared to the same period a year ago.

A senior official of the ERD said that, “The government is in comfort zone as the pandemic is ebbing away while development partners are providing loan assistance and grants frequently for completing the ongoing projects.”

The ADB assistance is the highest amounting to $ 1.35 billion in loans while its commitment is $ 650 million in the first four months in the current fiscal.

“Of the total ADB loan, more than $500 million was for procuring Covid-19 vaccine to combat the pandemic,” according to the official.

Besides, China disbursed loans worth $ 311.97 million out of $ 1.12 billion commitment during July-October against a series of ongoing development projects.

“The country received over $7 billion in foreign aid in two consecutive years which is very a positive signal for the country’s development. The inflow is also continuing this fiscal,” he observed.

The government did not face any financial crisis to buy Covid-19 vaccine due to inflow of foreign assistance disbursement by the development partners.

According to the ERD, $ 749.17 million was paid out as interest and principal against its total outstanding loans during July-October period of FY2022.

The amount was $ 649.96 million during the period in the last fiscal year.