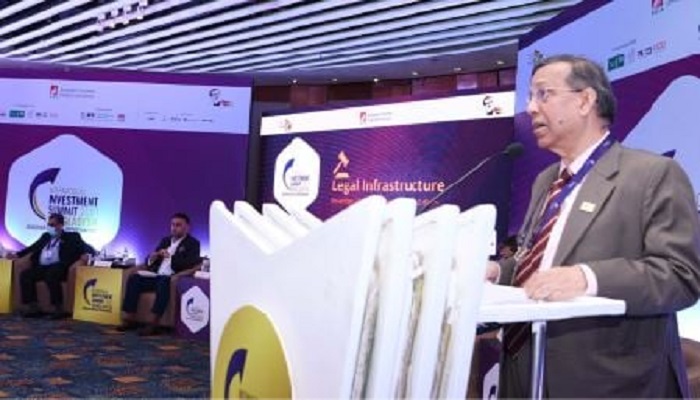 Law Minister Anisul Huq has urged global entrepreneurs to invest in Bangladesh as more regulatory and legal frameworks are underway to improve the overall investment climate in the country.

Terming that the government has been working relentlessly to integrate all regulatory services to a digital platform, he said the undergoing major initiatives include Secured Transaction Rule, modernisation of Bankruptcy Act, dedicated court for commercial disputes, fast-tracking of company-to-company land transfer, and so on.

The minister came up with calls and remarks at a plenary session styled legal infrastructure in an international investment summit held at a city hotel on the first day of the two-day International Investment Summit 2021 hosted by the Bangladesh Investment Development Authority (BIDA).

Speaking on the occasion, the law minister also said the government has also initiated an online bank account opening system and integration of it to One-Stop-Service (OSS).

The government is pursuing better regulatory delivery to promote investment, encourage innovation and stimulate growth through reduced regulatory costs and mitigation of regulatory risks for the investors.

She also underlined the need for easier taxation to facilitate local and foreign direct investment.

Ms. Kabir also lauded the government’s commitment and initiatives to amend and enact new laws and policies to make an investment-friendly climate in the country.

Dr. Rumana Islam said there should be a strong relationship between academia and other stakeholders to boost the business and commercial sector.

She also finds the gap between academia and other stakeholders in the business and commercial sector that should be bridged well.

Masrur Reaz said Bangladesh is forward-looking to make news laws and policies and amend necessary laws to make a vibrant business-friendly atmosphere and it an investment-friendly country.

Moinul Kabir said the government has already reformed different business and investment-related laws significantly to expedite the domestic and foreign investment in the country.

The government has taken the initiative to amend Arbitration Act, Contract Act, and Evidence Act to make a positive environment for investment, he added.

Tanjib-Ul-Alam said the data protection act is now in the final stage to be enacted.

Data sharing and protection will be easier after the enactment of the law, he said, adding that it will also pave the way for new investment opportunities in the country.