Bangladesh’s journey to prosperity: From ‘basket case’ to development miracle 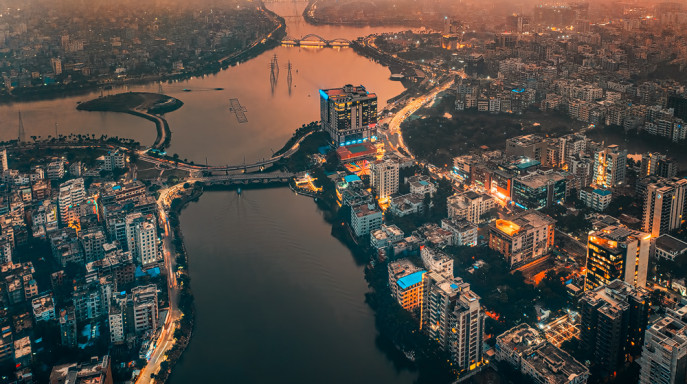 From being a test case of development with over 80 percent poor population after independence, Bangladesh has emerged as one of the world’s fastest-growing economies in 50 years.

Bangladesh attained the lower-middle-income status in 2015 and it is on track to graduate from the UN’s Least Developed Countries (LDC) list in 2026.

Bangladesh has made spectacular economic and social progress over the last five decades, putting an end to all the scepticism. Bangladesh tells the world a remarkable story of poverty reduction and development.

Bangladesh’s GDP growth reached its peak at 8.15 percent in 2019 from a negative growth of 5.48 percent in 1971. Even amid the pandemic, the country posted an impressive 5.43 percent growth for FY21.

On average, GDP growth rose from about 3 percent in the 1970s to 7 percent in the 2010s, supported by a demographic dividend, strong ready-made garment (RMG) exports, and stable macroeconomic conditions.

“By achieving the recognition of a developing country emerging from the debris of devastation of the Liberation War, Bangladesh has surprised the whole world,” State Minister for Planning Dr Shamsul Alam said.

He recalled that Bangabandhu formed the Planning Commission and formulated the first five-year plan in a very short time to remove the dents of the War.

“The foundation of the agricultural revolution was also initiated by Bangabandhu and his far-sighted planning has helped Bangladesh raise per-capita income from only $90 to $2,554 and lower poverty from 84 percent to 20 percent” Dr Alam added.

In the last 13 years, Bangladesh’s achievement has been very impressive and it is set to post double-digit growth by 2025 riding on relentless efforts of the government, he said.

Starting from a war-ravaged agriculture-dependent economy, Bangladesh has apparel, jute goods, leather goods, medicine and ICT in its export basket to be able to earn nearly $40 billion from exports, which was only $383 million in 1973.

Since 2009, the country witnessed an economic turnaround guided by prudent macro-economic and fiscal management.

The growth has been inclusive accompanying major socio-economic and human indices. 50 years into the journey, Bangladesh now is considered a role model for other developing countries and is set to become the 25th largest economy in the world by 2035.

After assuming power, the Awami League government attached special importance to removing infrastructural bottlenecks and setting the country on the high-growth track.

With the intensified efforts for power generation, a major economic driver, the country has already ensured nearly cent percent electricity coverage as it power generation capacity has risen to 25,235MW now.

Besides, the government also gave priority to socioeconomic development and expansion of the social safety net to safeguard the poor.

For Bangladesh, both public and private investments have been instrumental to stimulate economic growth.

The Investment-GDP ratio soared to 32.21 percent in FY 2018-19, but after the covid onset it modestly declined to 30.76 percent last fiscal.

In order to increase domestic and foreign investment, the government of Bangladesh has formulated investment-friendly policies, acts and laws apart from PPP initiatives and setting up of 100 economic zones.

In 2021, the country achieved self-sufficiency in food. The agricultural sector recorded gigantic growth in terms of food-grain, fish, poultry, and meat production.

In terms of human development, one major success has been the achievement of the goal of universal enrolment at the primary level. A significant decrease in the school dropout rate of 18 percent currently is another milestone.

Gender parity was achieved at primary and secondary education ahead of the Millennium Development Goal (MDG) Targets. The country’s literacy rate has risen to 75.6 percent in 2020 from 26.8 percent in 1974.

In the founding year of Bangladesh, the life expectancy was 46.6 years, which has risen to 72.8 years now.

Gender parity in Bangladesh has improved across all sectors due to greater participation of women in socio-economic and political activities.

Bangladesh has secured the first position in gender equality among South Asian countries for the second consecutive year at the Gender Gap Index.

Bangladesh has closed 73 percent of its overall gender gap, according to the Global Gender Gap Index 2020. From 1996 to 2017, the rate of female labor force increased from 15.8 to 36.3 percent, which is higher than the South Asian average of 35 percent.