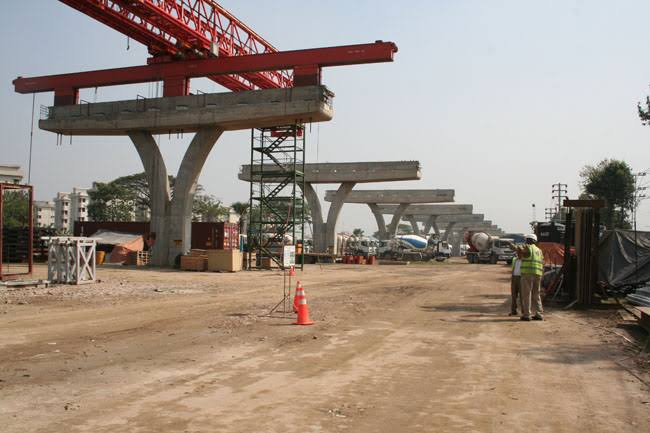 For the delay, they added, the tenure of the deal on toll collection under the project on the 47-kilometre thruway may fall into uncertainty.

Though some progress in the first PPP project of the DEE is visible after several years of stagnation since 2011, the sources said, the project's private concessionaire in fact could make only 37.3-percent execution progress till November.

Bangladesh Bridge Authority signed the concessionaire deal first in January 2011 and a revised one in December 2013 with authority vested on the company to collect tolls for 22 years, keeping space for construction of 19.73 kms of the elevated road and 31 ramps of 27 kms in three and a half years.

The BBA announced the project's commencement officially in January 2020 for the sake of the project's survival as the Italian-Thai Public Development Company Ltd, the private partner of the Tk 89.40-billion project, couldn't arrange funds in time for the construction works.

It also could not hand over the land to the Thai concessionaire firm in time, thus delaying the process of the commencement.

The gamut was, however, overcome after the selling of 34 percent and 15 percent shares to two Chinese companies by March 2020.

The DEE has been planned to bypass the highway traffic from Hazrat Shahjalal International Airport (HSIA) to Shanirakhra on the Dhaka-Chattogram highway keeping scope of connecting the capital city's different areas to get traffic.

This part was supposed to open in 2020-and it missed the deadline.

Official sources claim the project progress has been made "simultaneously in all three phases of construction as per reschedule".

And nearly 30 percent of the works in the second phase have been completed and it is planned that the entire first phase and part of the second phase up to Tejgaon rail station will be opened within next year.

The length under the second phase is 5.85km elevated road from Banani rail station to Moghbazar rail crossing.

"It is now planned to open the expressway from airport to Tajgaon rail station for traffic by December 2022," said project director AHMS Aktar, echoing the Road Transport Minister's recent announcement.

Admitting challenges in continuing road infrastructures in the congested Dhaka city, he said whatever scope has been found to work in three phases it is being carried out to meet the construction timeframe.

The PD claimed that major hurdle facing the project is over with the continuing of funding as well as land acquisition.

He ruled out the possibility of failing to meet construction time, saying: "The concessionaire for its own sake will meet it."

However, sources said, when part of the project will be inaugurated, three years of the project's entire construction period will be over by then.

Still third-phase work has yet to start and also work on the 31 ramps having 27 kms was not visible.

Besides, sources said, the project still needs to accommodate its design with Hatijheel area and Kamalapur Rail Station-the section which is being planned to develop under multimodal transport hub with a huge investment.

They see conflicts having arisen with the height limit of the DEE with some points of the rail corridor as its major part crosses over the rail line across the city. It has yet to resolve pier-related problems with some flyovers, including Moghbazar-Mouchak and Khilgaon flyovers.

Design of ramps are also not finalised till now.

The official sources said the BBA has been continuing its effort to resolve all these problems with authorities concerned. It has already held inter-ministerial meetings, including with Bangladesh Railway.

The BBA in support of the DEE project also is implementing support-to-DEE PPP project to acquire the land. Sources said land of the first two phases had already been handed over to the concessionaire. But the land to be acquired from the BR is yet to be completed.