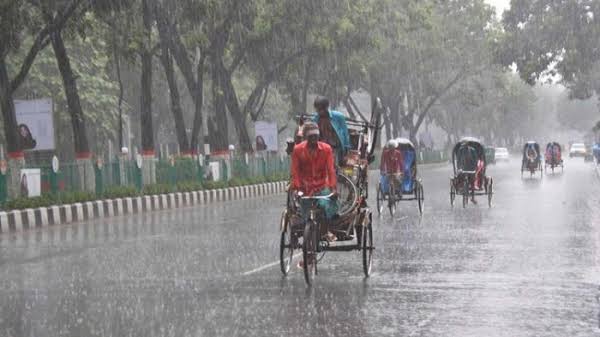 More rains expected to occur at places over Khulna, Barishal, Dhaka and Chattogram divisions during the next 24 hours from Monday morning as the depression in the Bay of Bengal weakened to a well-marked low.

The Met Office in a bulletin said moderately heavy to heavy rainfall, measuring from 22-43 mm to 44-88mm, are likely to occur during the 24-hour period.

The depression over northwest Bay and adjoining west-central Bay weakened into a well-marked low moving northeastward over adjoining West Bengal-Bangladesh coast at 9 am on Monday.

It will weaken into a low by the evening moving further in a north-northeasterly direction, the bulletin added.

Under the influence of the well-marked low, steep pressure gradient persists over north Bay.

All the maritime ports of the country have been advised to keep hoisting local cautionary signal number three.

All fishing boats and trawlers over north Bay and deep sea have been advised to take shelter and remain in shelter till further notice, it added.

Dhaka’s air quality showed an improvement on Monday morning with the capital city ranking 40th worst in the Air Quality Index (AQI) due to rains triggered by the depression in the Bay of Bengal.

Dhaka had an AQI score of 75 at 10:00 am and its air quality was classified as ‘moderate’.

‘Moderate’ AQI means that the air quality of an area is acceptable. However, there may be a risk for some people, particularly those who are unusually sensitive to air pollution.

Pakistan’s Lahore, India’s Delhi and Afghanistan’s Kabul occupied the top three spots respectively with scores of 258, 243 and 216 which is ‘very unhealthy’.