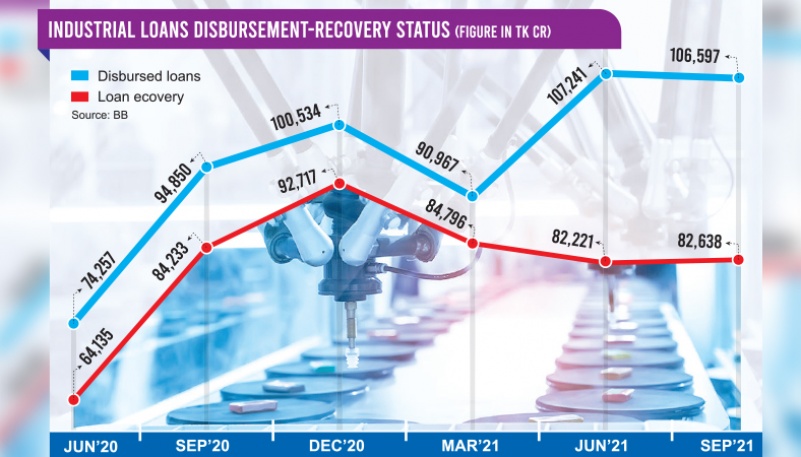 Although industrial loans disbursement rose in Q3, the recovery rate fell as borrowers are enjoying a moratorium on instalments but economists warn that bad loans could pile up after the facility expires.

Disbursement rose 12.39 percent in the third quarter compared to the same period last year but recovery fell by 1.89 percent.

Businesses and corporations take industrial loans to meet their short-term and long-term financial needs, such as funding capital expenditure and business expansion.

Disbursement of industrial loans in the July-September period stood at Tk 1,06,596.82 crore, up from at Tk 94,849.66 crore in the same period last year, Bangladesh Bank data show.

However, disbursement was down only 0.6 per cent in this quarter compared to the previous quarter of this year.

The demand for industrial credit is rising as the country’s economy has reopened and is going back to the pre-pandemic level, said Dhaka Bank’s Managing Director and CEO Emranul Huq.

“We are optimistic that the trend will continue in the coming days as businesses started to expand their industries,” he said.

The increasing trend of import payment is another indicator that the industrial sector has recovered from the Covid-19 blow and started to expand, he added.

The settlement of letters of credit, also known as actual import payments, during the July-October period increased 51.33 per cent year on year to $23.37 billion, BB data show.

Of them, import of industrial raw materials and capital machinery rose by 49.15 percent and 25.69 percent during the period.

Mati ul Hasan said loans recovery was expected to decrease this quarter as clients were enjoying payment holidays, which will end on December 31.

Throughout last year, borrowers enjoyed the loans moratorium facility announced by the central bank. This year, the facility is being provided on condition.

At the same time, it is a reality that most borrowers have lost their ability to repay the loans, he said.

Industrial credit disbursement is increasing due to the reopening of the economy after the Covid-19 blow, said Ahsan H Mansur, executive director of the Policy Research Institute of Bangladesh.

Industrial loans will increase in the upcoming days and bad loans will also increase after this month as payment holidays will end on December 31, said Mansur, also the Chairman of Brac Bank.

The economist said that loans recovery is slow now and will impact banks’ profits.