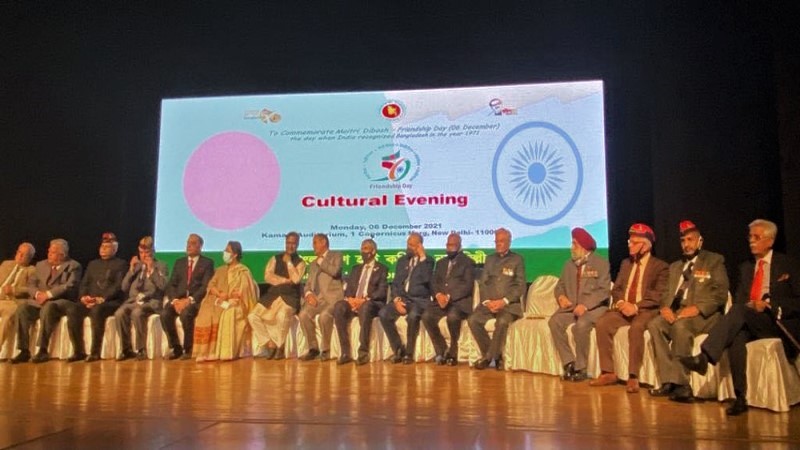 Bangladesh High Commission accorded a reception to 20 Indian war veterans participated in Bangladesh's War of Liberation as part of commemorating the “Moitri Dibosh” or Friendship Day on December 6, the day when neighbouring India recognized Bangladesh in 1971.

The war veterans belonging to the Indian armed forces, who joined the Bangladesh's Liberation War in 1971 against Pakistan, were honoured at a function arranged by the mission at city's Kamani auditorium to celebrate the “Moitri Dibosh” and the 50th anniversary of Bangladesh India diplomatic relations.

Bangladesh and India is jointly commemorating the two special occasions as per decision taken during the visit of Indian Prime Minister Narendra Modi to Dhaka in March this year.

Apart from Dhaka and New Delhi, the day is being commemorated in 18 others countries across the world.

Addressing the function, they recalled the courageous role of freedom fighters of Bangladesh and the Indian soldiers during the 1971 liberation war and the sacrifices they have made to liberate the country from the Pakistani occupation forces.

The Indian state minister for external affairs thanked Bangladesh for honouring the over 1500 Indian soldiers who sacrificed their lives during the war.

Later, the two state ministers handed over the crests and gifts to the war veterans as a mark of respect for their contribution to the Bangladesh Great War of Liberation.

The programme was followed by a spectacular cultural function participated by the Bangladeshi performers. Their sparkling presentation of Rabindra Sangeet, patriotic songs, folk songs, dances depicting the cultural heritage of rural Bangladesh and above all a fashion show presented by the spouses of the mission's officials enthralled the audience at the jam packed auditorium.

A dance team also performed depicting the rich history and culture of Bangladesh.