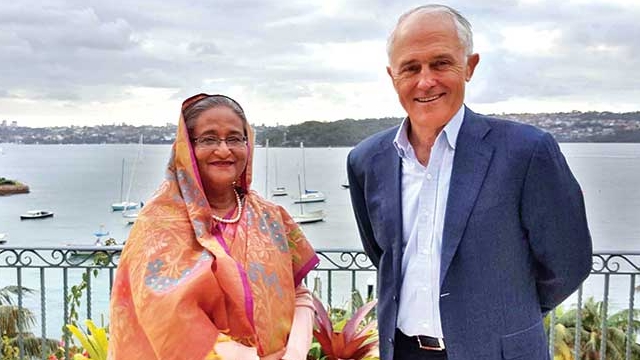 Australian Prime Minister Malcom Turnbull on Saturday reaffirmed that his government would continue to stand by Dhaka on the Rohingya issue as he joined a meeting with his visiting Bangladesh counterpart Sheikh Hasina.

Bangladesh premier's press secretary Ihsanul Karim said the meeting was held Turnbull's residence where the Australian prime minister reiterated his country's stance on the crisis, reassuring his counterpart of keeping sustained pressures on Myanmar as well to take the Rohingya nationals back to their homeland.

The premier, he said, informed Turnbull of the steps taken by Dhaka in giving temporary shelter to Rohingyas in Bangladesh and her government's future plans for the forcibly displaced people.

Karim said both the leaders discussed issues of bilateral trade and investment and agreed to find out a viable means to boost up cooperation.

Sheikh Hasina invited Turnbull to Bangladesh while the Australian premier accepted it saying he would visit Dhaka at a mutually convenient time.

Foreign Minister AH Mahmood Ali was present during the meeting.