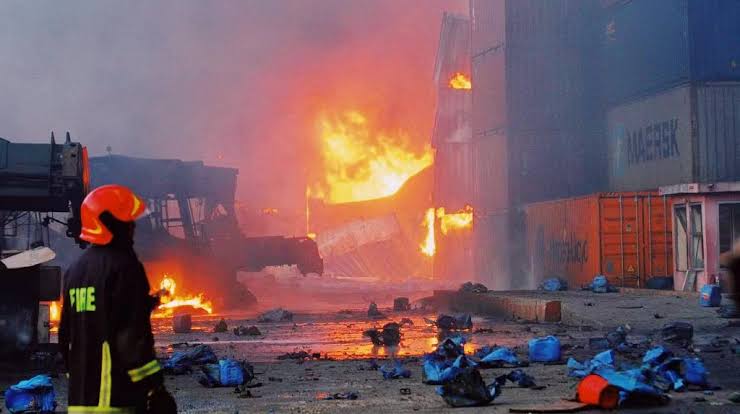 Nine firefighters, among 49 people, were killed and more than 300 others injured after a fire broke out at a container depot in Chattogram's Sitakunda on Saturday night.

At least 11 policemen were burnt and injured in the fire. Two of them have been sent to Dhaka for better treatment.

"The explosion was heard within a radius of 4km from the spot," Faruk added.

The fire broke out inside the loading point of the depot and tore through the complex that also contained chemical containers.

The fire spread fast and got worse because of the chemical containers, he said adding that lack of water made their fight to contain the blaze difficult, he said.

Sixteen firefighting units were dispatched immediately to fight the flames. Firefighters from Cumilla, Noakhali and Feni also joined them.

A total of 15-20 explosions occurred at the depot following the fire, said Faruk.

Thirty firefighters and ten policemen sustained injuries. Of them, 19 are undergoing treatment at the ICU of CMCH, he added.

After hours of hectic effort 23 firefighting units managed to bring the blaze under control around 7.30 am.

Already, a 20-member special HAZMAT (hazardous material) team left for Chattogram from Dhaka to assist the fire service men working at the depot.

Director General of Fire Service and Civil Defense, Main Uddin, who visited the spot on Sunday morning, said “It has become difficult to extinguish the fire due to the existence of hydrogen peroxide. Already two teams of Rab and army already are there to assist the fire service men.”

President of the association of inland container depot owners Nurul Qayum Khan said there was a container of hydrogen peroxide at the depot for shipment and that might be the reason behind the big blast and the fire.

Chattogram Civil Surgeon Ilias Chowdhury has made a public appeal for blood donation at the CMCH for treatment of the injured.

Doctors from nearby government and private hospitals have been requested to report to CMCH to deal with the situation.

Bangladesh Red Crescent Society volunteers are working with the hospital authorities to collect blood from donors.

"It is not yet clear what caused the fire. But I think it started from a container. Arrangements are being made to ensure that the injured get the best treatment; we will bear all costs," BM Container Depot Director Mujibur Rahman said.

"Those who have sustained injuries will get maximum compensation. Also, we will take responsibilities for all the victims' families," he added.

“I urge the government to conduct a full investigation. Export materials mainly consisted of clothing and food products. The fire can spread if a clothing container catches fire. That's what has happened.”

Nazmul, general manager of sales and marketing at the BM Depot, arrived at the scene later in the day, around 11 am.

“We will confirm the cause of the fire after an investigation,” he told the media after his arrival. “It could have been sabotage. Only a proper investigation can reveal the truth.”

“The depot was storing goods amounting to Tk 10 billion. Hundreds of containers were burnt. There were many workers on the night shift. It is a major blow to the country. Most of the goods here are for export.”

BM Container Depot, a Dutch-Bangladesh joint venture, was set up as an inland container depot (ICD) and it is operating since May, 2011. It is one of 19 such ICDs located in Chattogram.

The chairman of the depot is Dutch businessman Bert Pronk, who has other investments too in Bangladesh, while the managing director is Mostafizur Rahman of the Smart Group of Industries.

The relatives of the injured people and volunteers of Red Crescent Society at Chittagong Medical College and Hospital said they had to run around to get blood for the victims.

Meanwhile, President Abdul Hamid and Prime Minister Sheikh Hasina on Sunday expressed deep shock and sorrow at the loss of lives in the massive fire.

They also prayed for the eternal salvation of the departed soul and expressed sympathy to the bereaved family members.

Besides, a 250-member team of Bangladesh Army joined the rescue operation at the BM Container Depot on Sunday.

There is a drain in the depot, which leads to a canal. The canal is connected to the sea. The army is working to prevent the chemicals from entering the sea.

Lt Col Munira Sultana said, "Our main task now is to protect the sea from chemicals. We are working towards that goal. But it is not yet known how many containers contained chemicals.”

The Disaster Management and Relief Ministry announced to allocate Tk one crore for the victims.

Besides, the ministry also allocated 1000 packets of dry foods for them.

State Minister for Labour and Employment Begum Monnujan Sufian announced Tk 2 lakh each as compensation for the families of the deceased workers and Tk 50,000 for the injured victims.

A probe committee will be formed quickly with the representatives of all departments, he said.