New poor in Bangladesh remains high in May: Survey 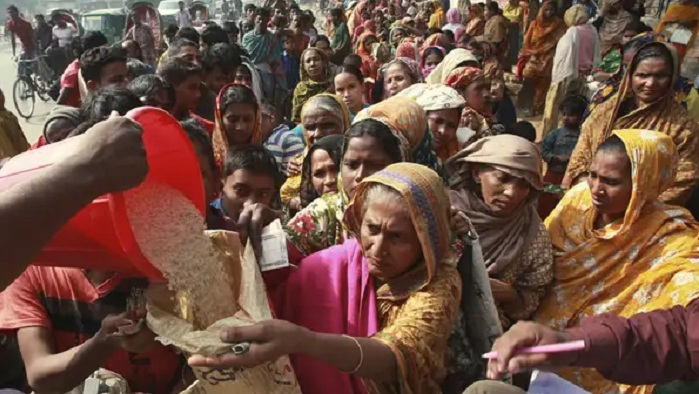 National estimate of the country’s new poor remains high in May 2022 due to inflation and slower-than-expected economic recovery from the Covid-19 shock among the vulnerable non-poor, according to a latest survey.

The ongoing inflationary pressures have negatively affected the real income, food security, and essential household expenditures of the low-income households in Bangladesh and significantly disrupted their economic recovery from the Covid-19 shock, it pointed out.

They presented these findings from the latest round of a survey in a joint PPRC–BIGD study, which has been capturing, since April 2020, the evolving economic crisis among low-income communities in Bangladesh due to Covid-19 through multiple rounds of surveys among a large sample of urban slum and rural population.

Almost 4,000 households were surveyed in the fifth round conducted in May this year.

They show that per capita daily incomes were steadily recovering after the second lockdown—which increased by a 27 per  cent from August 2021 to January 2022— but have started reversing again by a 6.0 per cent between January and May 2022 due to inflation, disrupting the expected recovery of real incomes to that of pre-pandemic times.

Dr Rahman said, “Inflation has compounded the Covid-induced disruptions to economic recovery, with real incomes of poorer households still 15 per cent below pre-Covid levels two years from the onset of the pandemic. Bangladesh now faces a new risk—the reversal of meeting the targets of nutrition and education set in the Sustainable Development Goals.”

The recent fall in daily per capita real incomes in the urban slums (8.0 per cent) has been sharper than that in the rural areas (3.0 per cent). Livelihoods in urban slums were already more severely affected by Covid and recovering more slowly, compared to those in villages, Dr Hossain reveals.

The inflation has further slowed the recovery in the slums, he added.

The inflationary pressure also appears to have pulled more women to find work; 40 per cent of female respondents in the survey were engaged in income-generating activities in January, which jumped to 52 per cent in May, but the longer term is still grim for women—36 per cent women in the sample who were working pre Covid still remains to out of work, the survey shows.

Because of rising prices, most of the surveyed households have drastically reduced or stopped the consumption of major food items such as fish, meat, milk, and fruit, since February, as per the survey.

Here too, the reduction in quantity and quality of food consumption has been more extreme in the urban slums than the rural areas, the survey report said adding that  as of May, one in five urban slum households had also skipped at least one meal in the last month due to a lack of money.

Compared to August 2021, more households were depending on their own incomes and production for their food needs in May 2022, as opposed to loans, dues from shops, and help from relatives. This seems to be a positive development, the study said.

However,  nearly 38 per cent of the households in the study also said they needed to borrow more money but could not, mostly because of reasons like inability to repay or existing large debt burdens, indicating that many of these households are under severe financial stress.

Moreover, since February 2022, two-thirds of the households have reduced non-food expenditures, including a worrying decrease in medical and children’s education expenses.

The households are also buying less and buying lower quality goods to cope with the price hike. Compared to last year, the purchase of fair price rice has increased in May 2022, among both people below and above the poverty line, the survey unveils.

There has been a corresponding change in the purchase of TCB food, 38 per cent of surveyed HHs bought from TCB since February 2022, it discloses.

Despite this, there is a large unmet demand. Only less than 5.0 per cent HHs said that they did not need TCB food, it reveals.

Over half of the HHs in the study admitted they needed to buy from TCB but could not for various reasons, including not finding the opportunity or not having a TCB Family Card.

A fifth of them in the survey said they were unable to complete their purchases due to the long waiting time.

Though the overall satisfaction of those who purchased from TCB was high, two- thirds of them also mentioned long queues as a big challenge in purchasing, it said.

The survey indicates the need for a vast expansion of TCB and similar programmes for poor urban and rural households.

More than half of the households believe that the price hike is due to governance issues. The majority want the government to punish the syndicates and corrupt businesses, while a third suggested reducing prices, particularly for low-income households, it said.

Some worrying longer-term trends have also transpired from the latest round of the survey. First, an undesirable convergence of incomes among different economic groups has emerged.

A third of the female respondents who were employed before the pandemic are still out of work, the study says.

“Government action for the informal sector and the poor will be critical at this time, and this needs to protect both consumption and production capabilities. Social protection needs to be reimagined to align with our challenges and ambitions.”

Noted researchers, journalists, and media persons were present at the virtual press conference.