Exercise austerity amid global price hike of goods: PM to all 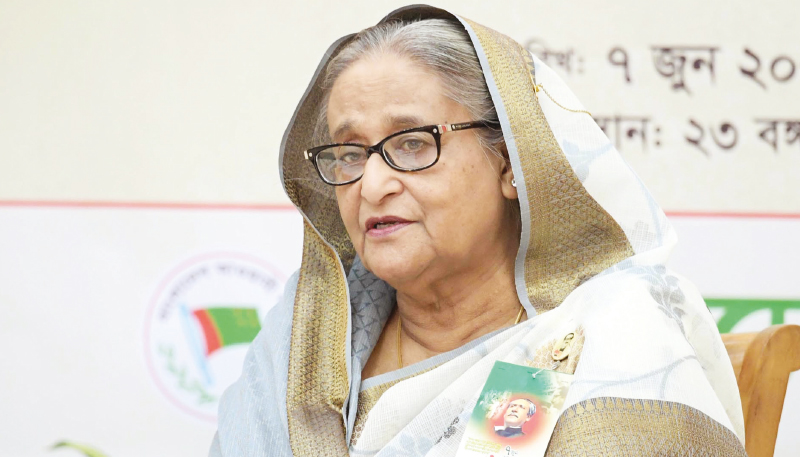 Prime Minister Sheikh Hasina on Tuesday urged the people to take austerity measures amid high inflation and price hike of goods across the world due to the Russia-Ukraine war and the Covid-19 pandemic.

“Yes, it is true that prices of goods have shot up to some extent. But it is still uncertain how much the prices would soar further. It is not only in Bangladesh, but also throughout the world. Rather we’ve been able to keep these under control at least (to some extent). We’ve been trying our best,” she said.

The prime minster was addressing a discussion of Awami League marking the historic Six-Point Day through a virtual platform from Ganabhaban.

She said this war doesn’t seem to end so soon. “We all have to be economical. We’ll have to pay attention so that food will no way be wasted,” she said adding that the shipping cost to transport goods went up from US$ 800 to US$ 2500-US$ 3,000.

Pointing to the readymade garment workers’ movement to raise salary, the premier said they might lose their jobs if any unrest is created in the sector now in this tough time when the purchasing power of the people is declining in the export markets of Bangladeshi clothes.

“If any kind of unrest is created following someone’s words, it will harm not only the country but also the workers. Everyone will have to keep it in mind. I think the matter should be informed to the workers and their leaders,” she said.

She said the labour leaders will not face any trouble as they will get a good amount of money from instigators. “But what will be the fate of workers?

They will be affected for taking to the street,” she added.

Hasina said her government increased the salary of the apparel workers on several occasions. A worker now gets Tk 8,000-Tk 10,000 a month and other facilities, but the salary was only Tk 1,600 in the past, she added.

She said the government has been providing subsidies in different sectors. It has given all sorts of incentives to the garment sector. “It is not possible to provide more than that,” she added.

As the government helped the factories preventing their closure for Covid-19, now they get work orders, their exports increase and they can import capital machinery, she said.

The prime minister said if anyone now wages movement leading to the shutdown of the factories, the job would also be lost. “If you don’t understand it, we’ve nothing to do here. Because how much more can we give to the private sector!” she said.

“The purchasing power of the buyers in the importing-countries is declining and it is worsening day by day,” she said, adding that the prices of goods soared in the USA, Europe and other places and the people are suffering there.

Many developed countries are now facing difficulties amid the global economic recession caused by the Coronavirus outbreak and then Ukraine-Russia war. The inflation rate shot up to even 17 percent in some countries in Europe and over 10 percent in the USA, she added.

Hasina said the people have been asked to exercise austerity in the use of electricity and edible oil in England. “But we’ve been able to keep the prices of goods under control by providing subsidies as much as possible,” she said.

“We’ve increased our reserve of foreign currencies to US$ 48 billion. Now we’ve been providing subsidies and support to the electricity, gas, agriculture and health sectors drawing the money from the reserve,” she added.

The prime minister asked the people not to keep a single inch of arable land uncultivated amid the global food shortage. “We should arrange (produce) foods at least to be needed for ourselves,” she said.