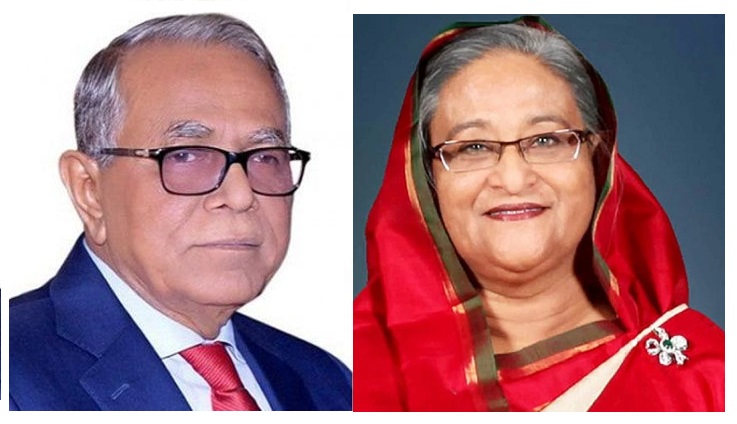 President M Abdul Hamid and Prime Minister Sheikh Hasina greeted all who were involved in the implementation of the Padma Bridge project as the bridge will be inaugurated on Saturday.

On the eve of the historic day, they also greeted the countrymen issuing separate messages.

In his message, the President said: "I am very happy to know that the Padma Bridge, a symbol of Bangladesh's self-reliance and self-respect, is being inaugurated. I extend my best wishes to all those involved in the implementation of this project.”

As a result of adoption and implementation of extensive development activities of the government, unprecedented improvement has been achieved in the communication system of the country, the head of the state added.

Many mega projects including Metrorail, Elevated Expressway and Karnafuli Tunnel are being implemented, he said, adding: “Today, the Padma Bridge stands as a symbol of the nation's glory in the heart of the turbulent Padma (river).”

He lauded Prime Minister Sheikh Hasina as the premier is leading from the forefront of these achievements.

Due to her (the premier’s) courage, strong steps and timely decisions, the construction of the Padma Bridge has been possible with the own funds of Bangladesh, Hamid said.

“The implementation of this bridge has given us the courage to stand high with confidence across the globe as a symbol of wealth management, transparency, accountability and efficiency,” he continued.

The president hoped that this bridge will play an important role in the socio-economic development of the country through increasing trade, investment and industrialization.

In her message, the Prime Minister said: “We greet all concerned, including local and foreign engineers, consultants, officers and employees, the army (involved in monitoring and ensuring security) and construction workers engaged in the implementation of the challenging project, Padma Multipurpose Bridge Project, (PMBP) for their contribution and tireless works.”

The premier extended her gratitude to the people on both sides of the bridge for providing lands and assisting in the implementation of the project in various ways.

The World Bank has filed a case alleging corruption in the Padma Bridge project, she said, adding that a Canadian court has ruled that all allegations made by the World Bank are false, fabricated and baseless.

All allegations of corruption are proved false, she said, adding that later, the government decided not to take a loan from the World Bank.

She thanked the countrymen as the government received huge support from them when Bangladesh announced to build the bridge with its own funds.

The Bangalees have established them in the world as a brave nation free of corruption, she said.

She said the country has proved its own ability by being inspired by this eternal message of the greatest Bangalee of all time, Father of Nation Bangabandhu Sheikh Mujib's historic speech on March 7, uttered in a thunderous voice – “You cannot suppress 7 crore people (Shaat koti manushke dabaya rakhte parba na).

The construction of the Padma Bridge established uninterrupted, affordable and fast communication with the capital in 21 districts of the south-western parts of the country, she continued.

The importance of this bridge in the multifaceted development of this region with huge potential is immense, she said.

New doors will be opened for the development of the region, especially in the industrial and tourism industries, Sheikh Hasina added.

Tourist arrivals will increase in various archeological and scenic places including the tomb of the Father of the Nation at Tungipara, Sundarbans and Kuakata beach, the premier said.

She further said that the Padma Bridge will play a significant role in the extraction of agricultural and fishery resources in the coastal areas and their rapid marketing across the country.

The 'Padma Bridge' will serve as an effective communication system using the full capacity of Mongla seaport , Payra seaport, bridges built over major rivers and Rampal and Payra power plants already established in the region during the Awami League led government, she hoped.

Inter-country trade will increase through important land ports like Benapole, Bhomra and Darshana located in this region, she said, adding that the bridge will connect electricity, gas, optical fiber and other services at both ends.

The implementation of the Padma Multipurpose Bridge project will increase the overall production of the country by 1.23 percent and will make a unique contribution to socio-economic development by alleviating poverty at the rate of 0.84 percent per annum, she said.

“This new chapter of development has been unveiled as a result of the confidence and support of the patriotic people,” Sheikh Hasina added.

“We will continue to work sincerely to fulfill the hopes, aspirations and dreams of the people in the days to come,” the premier continued.

“With the combined efforts of all, we will be able to build the 'Sonar Bangladesh' as dreamt by Bangabandhu,” she said.

Both the president and the premier wished successful implementation of all mega projects in the country like Padma Bridge.