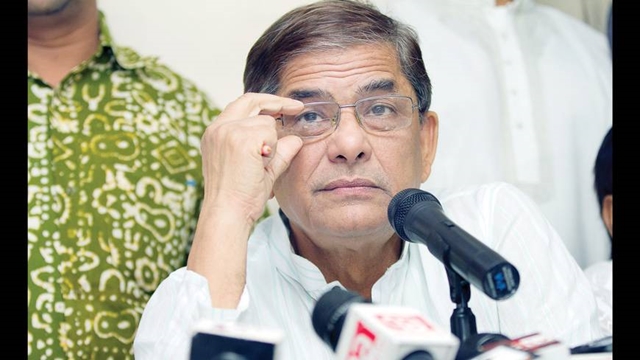 The diplomats told the BNP leaders, ‘Let Tarique come and take the leadership.’ They told this on last night while the leaders of BNP were holding a meeting with the foreign diplomats at BNP’s Gulshan office.

Diplomats from 17 different countries including the United States and India were present at the meeting. BNP secretary general Mirza Fakhrul Islam Alamgir briefed the diplomats at the beginning and then discussed different issues.

After the briefing of Mirza Fakhrul, a diplomat asked, ‘What is the meaning of this briefing? If you want us to be informed, then it’s okay. But, if you want us to influence or pressurize the government, then we’ll say sorry as it will be meddling in internal affairs of another country. It will be against the diplomatic protocol.’ Echoing his words, another diplomat said, ‘Frankly speaking, Bangladesh is no longer in its previous position.’

The diplomats were more interested in knowing what BNP is thinking, what its planning is about right now. They wanted to know whether BNP would take part in the next general election of the country.

In response, the BNP secretary general referred to the demands of Khaleda’s release, non-partisan polls-time government and withdrawing false cases from the party leaders and activists to be fulfilled before they join the election.

When the diplomats asked about the formula of a non-partisan polls-time government, Fakhrul said that he would provide when the time is right. Then the diplomats said, ‘The Election Commission said that it would announce the election schedule in October. Aren’t these demands only to pressurize the government?’ Fakhrul said, ‘The bottom line is that we want a free and fair election. We want a level playing field.’

At this point, the diplomats asked, ‘If you don’t join the election, how will you find out about the level playing field?’ BNP secretary general said, ‘BNP wants to join the election. But, the government is trying to create such an environment that BNP cannot join the election.’ Then he told them about some of the incidents of KCC election. He raised the point about mass arrest of BNP men there.

Mirza Fakhrul did not respond to this question. The diplomats wanted to know if BNP wins in the KCC election, what would BNP say then? Then Fakhrul avoided the question while laughing and said, ‘Let’s hope for the best.’

Mirza Fakhrul complained to the diplomats that the government is doing injustice to the BNP chairperson. Then the diplomats asked him, ‘If the Appellate Division doesn’t grant her bail, what will BNP do?’ Fakhrul again did not respond and changed the topic of the discussion.

BNP leaders were embarrassed at the questions like- when will Tarique Rahman return to run the party? Why is he not coming and facing the legal procedures? Why are those who are in the country unable to run the party?

At the end of the meeting, the diplomats thanked BNP leaders for their peaceful protest and requested them to take part in the next general election.