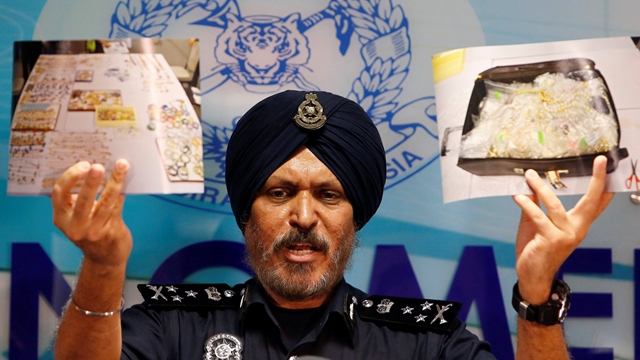 Authorities are investigating Najib as part of their probe into how billions of dollars went missing from state fund 1Malaysia Development Berhad (1MDB), which was founded by the former premier.

Since unexpectedly losing a general election to Mahathir Mohamad in May, Najib has been barred from leaving the country, questioned by the anti-graft agency and has had his personal and family houses searched as part of the 1MDB probe.

Amar Singh, head of the police commercial crime division, told a news conference that the retail cost of all the items seized from six properties linked to Najib totalled 900 million ringgit to 1.1 billion ringgit ($224 million-$273 million).

“We couldn’t do the counting at the premises because the numbers were too huge,” Singh said, adding that the seizures were the biggest in Malaysian history.

It took three days, six cash counting machines and 22 officials from the central bank to count the cash found at the premises, he said, adding the cash totalled 116.7 million ringgit.

Jewellery accounted for the biggest portion of the seizure - 12,000 pieces of jewellery that Singh said would cost 660 million to 880 million ringgit at retail prices.

The single most expensive item was a diamond necklace with yellow gold - worth 6.4 million ringgit at cost price, he said.

Authorities are yet to establish who the owners of the seized items are, Singh said, adding that Najib and his wife Rosmah Mansor would “soon” be called in for questioning.

Singh also said the police seized a total of 567 handbags in 37 different brands. The Hermes bags alone were worth 51.3 million ringgit, he said.

The police also found 423 watches worth 78 million ringgit and 234 pairs of sunglasses.

Mahathir, in an interview with Reuters last week, said Najib was fully responsible for the 1MDB scandal and that authorities have “an almost perfect case” against the former leader.

Najib, who led the country for almost a decade, has consistently denied any wrongdoing, having explained three years ago that the nearly $700 million transferred into his account had been a donation from an unnamed Saudi royal.

The US Department of Justice has said the money came from 1MDB, and that a total of $4.5 billion was misappropriated from the fund.

Speaking to Reuters exclusively last week, Najib said he shouldn’t be blamed for the alleged stealing from 1MDB, and declared he knew nothing about the money from the state fund appearing in his bank account.