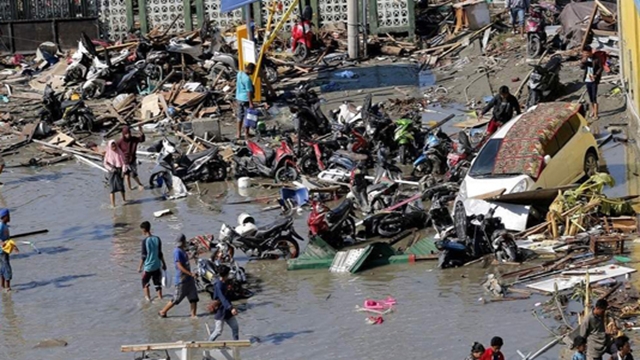 The death toll from a powerful earthquake and tsunami in Indonesia rose to 420 Sunday, as stunned people on the stricken island of Sulawesi struggled to find food and water, looting spread and fears grew that whole towns had still not been heard from.

“It feels very tense,” said 35-year-old mother Risa Kusuma, comforting her
feverish baby boy at an evacuation centre in the gutted city of Palu. “Every
minute an ambulance brings in bodies. Clean water is scarce. The minimarkets
are looted everywhere.” 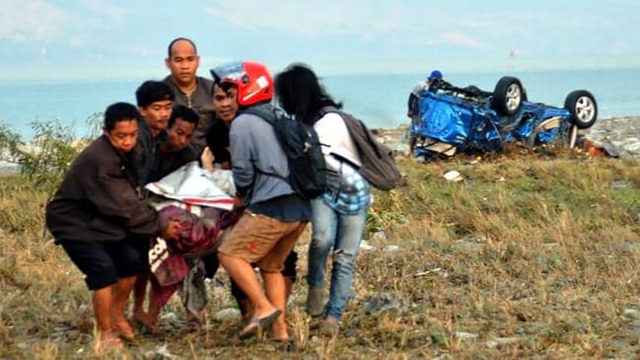 Indonesian vice-president Jusuf Kalla said the toll could reach “a
thousand, thousands” based on previous disasters.

State media reported that the death toll had increased to 420 with a
further 540 serious injured, but those figures were for Palu alone and relief
agencies expressed fears that the number could spike once news started coming
in from other affected areas.

“Worryingly, the National Disaster Management Agency has said they’ve
received no information from the district of Donggala, which is closer to the
epicentre of the earthquake,” said Helen Szoke of Oxfam, referring to a
region that is home to around 300,000 people.

In the coastal city of Palu on Sunday aid was trickling in, the Indonesian
military had been deployed and search-and-rescue workers were doggedly
combing the rubble for survivors — looking for as many as 150 people at one
upscale hotel alone.

“We managed to pull out a woman alive from the Hotel Roa-Roa last night,”
Muhammad Syaugi, head of the national search and rescue agency, told AFP. “We
even heard people calling for help there yesterday.” 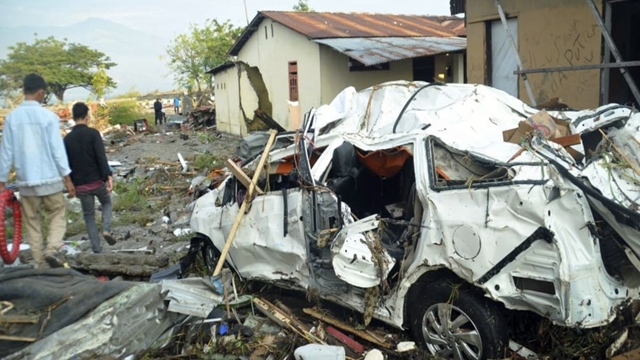 “What we now desperately need is heavy machinery to clear the rubble. I
have my staff on the ground, but it’s impossible just to rely on their
strength alone to clear this.”

There were also concerns over the whereabouts of hundreds of people who had
been preparing for a beach festival when the 7.5-magnitude quake struck
Friday, sparking a tsunami that ripped apart the city’s coastline.

Amid the levelled trees, overturned cars, concertinaed homes and flotsam
tossed up to 50 metres inland, survivors and rescuers struggled to come to
grips with the scale of the disaster.

Indonesian president Joko Widodo was expected to travel to the region to
see the devastation for himself on Sunday.

C-130 military transport aircraft with relief supplies managed to land at
the main airport in Palu, which re-opened to humanitarian flights and limited
commercial flights, but only to pilots able to land by sight alone.

Satellite imagery provided by regional relief teams showed the severe
damage at some of the area’s major sea ports, with large ships tossed on
land, quays and bridges trashed and shipping containers thrown around.

Hospitals were overwhelmed by the influx of those injured, with many people
being treated in the open air. There were widespread power blackouts.

“We all panicked and ran out of the house” when the quake hit, said Anser
Bachmid, a 39-year-old Palu resident. “People here need aid — food, drink,
clean water.”

Dramatic video footage captured from the top floor of a parking ramp as the
tsunami rolled in showed waves bringing down several buildings and inundating
a large mosque.

“I just ran when I saw the waves hitting homes on the coastline,” said Palu
resident Rusidanto, who like many Indonesians goes by one name.

About 17,000 people had been evacuated, the government disaster agency said
and that number was expected to soar. 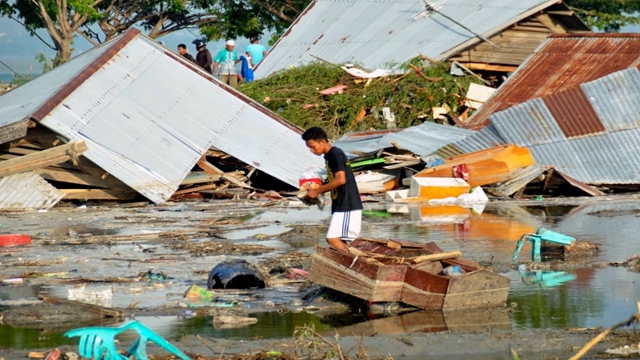 “This was a terrifying double disaster,” said Jan Gelfand, a Jakarta-based
official at the International Federation of Red Cross and Red Crescent
Societies.

“The Indonesian Red Cross is racing to help survivors but we don’t know
what they’ll find there.”

Images showed a double-arched yellow bridge had collapsed with its two
metal arches twisted as cars bobbed in the water below. A key access road had
been badly damaged and was partially blocked by landslides, the disaster
agency said.

Friday’s tremor was also felt in the far south of the island in its largest
city Makassar and on neighbouring Kalimantan, Indonesia’s portion of Borneo
island.

The initial quake struck as evening prayers were about to begin in the
world’s biggest Muslim majority country on the holiest day of the week, when
mosques are especially busy.

Indonesia is one of the most disaster-prone nations on earth.

It lies on the Pacific “Ring of Fire”, where tectonic plates collide and
many of the world’s volcanic eruptions and earthquakes occur.

Earlier this year, a series of powerful quakes hit Lombok, killing more
than 550 people on the holiday island and neighbouring Sumbawa.

Indonesia has been hit by a string of other deadly quakes including a
devastating 9.1-magnitude earthquake that struck off the coast of Sumatra in
December 2004.

That Boxing Day quake triggered a tsunami that killed 220,000 throughout
the region, including 168,000 in Indonesia.