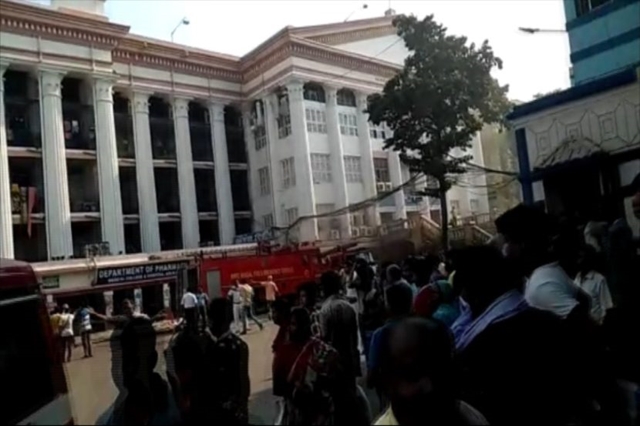 Hundreds of patients were evacuated safely on Wednesday after a fire broke out in the pharmacy building of the Kolkata Medical College and Hospital, officials said.

At least ten fire engines were pressed into service after the fire was noticed at around 8:00am in the building of the hospital, the oldest institute of western medicine in the country, located on College Street.

The fire was contained at around 9:30am, firefighters said.

Thick smoke triggered panic in the campus as hospital workers and relatives of the patients scrambled to bring them out of the building on trolleys and even wrapped in bedsheets to safety.

The cotton and consumables stored in the building stoked the fire, claimed hospital workers.

“Let’s assess the situation. I have been told that all the patients have been evacuated. The director general of fire services is here. Ten fire engines are working,” said Kolkata mayor and minister in charge of fire and emergency services Sovan Chatterjee.

“Right at this moment we are not in a position to find out who is responsible,” added Chatterjee.

The fire comes just 17 days after a building in Bagri market, Kolkata’s trading hub of Burrabazar, was gutted late on September 16. In December 2011, a fire in AMRI Hospitals in the city killed more than 90 people.