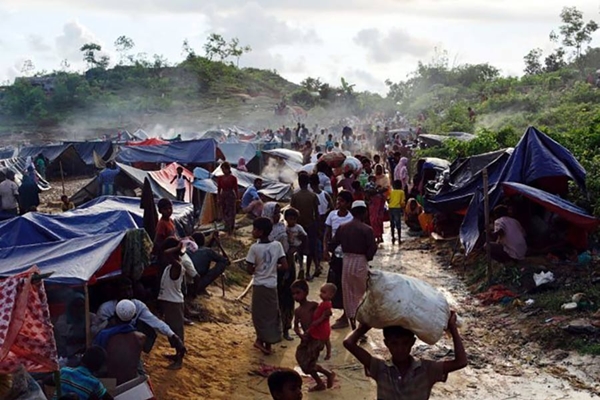 The European Union is considering trade sanctions on Myanmar over the Rohingya crisis, potentially stripping the country of tariff-free access to the world’s largest trading bloc, three EU officials said.

The sanctions, under discussion at the European Commission, would include Myanmar’s lucrative textile industry and potentially put at risk thousands of jobs there but would not come into effect immediately, giving the EU leverage to stop what the West says is ethnic cleansing of Muslim Rohingya.

Even by triggering a six-month review process on whether to impose trade sanctions, which could be reversed if Myanmar met humanitarian and democratic targets, the bloc would mark a significant shift in policy.

The impetus for the move was a UN report in August, which accused Myanmar’s military of carrying out killings of Rohingya with “genocidal intent”. That, and the rare US step of putting sanctions on two entire military units, have put an onus on the European Union to act, officials said.

“We are concerned about the impact on the population from our potential measures, but we cannot ignore a U.N. report describing the military campaign as genocide,” said one EU official of the debate within the European Commission, the EU executive responsible for the bloc’s trade policy.

Until now, the EU has imposed travel bans and asset freezes on several members of the Myanmar military, but has shied away from slapping sanctions on Myanmar’s commander-in-chief, Senior General Min Aung Hlaing, who the United Nations said should be prosecuted along with five others for genocide and crimes against humanity.

Myanmar has rejected the UN findings as “one-sided”. It says military action which followed militant attacks on security forces in August last year was a legitimate counterinsurgency operation.

Myanmar government spokesman Zaw Htay did not answer telephone calls seeking comment on the possible EU move on Wednesday. He said last month he would no longer speak to the media over the phone, only at a biweekly conference.

“Removing this duty-free access is a measure of last resort, but we must act if other measures are not delivering,” said one EU official involved in the discussions.

“In light of the deteriorating situation on the ground, the Commission is currently assessing possible ways of escalating its political and economic response,” a Commission source said.

Rights groups say the targeted EU sanctions so far have not forced the military or civilian leader Aung San Suu Kyi to protect civilians, resettle refugees or stop attacks on press freedoms that have included the imprisonment of two Reuters reporters for breaching a law on state secrets.

Myanmar’s exports to the European Union were worth 1.56 billion euros ($1.81 billion) in 2017, nearly 10 times their value in 2012, after which the bloc gave Myanmar “Everything But Arms” trade status.

That status means it can sell any goods tariff-free to the bloc, except weapons. The EU is Myanmar’s sixth-largest trading partner and an important source of foreign direct investment.

Myanmar’s clothing industry is its top export earner after oil and gas, generating more than $2 billion in exports and 450,000 jobs last year, according to industry association MGMA.

Trade sanctions would end an economic opening granted to support Myanmar’s transition to democracy after Suu Kyi emerged from 15 years of house arrest under military rule and led her party to take both the parliament and the presidency.

One more limited option for the EU could be to exempt textiles, an official said, but given the size of the sector, that would significantly reduce the impact of EU sanctions. Clothing and footwear are worth more than three-quarters of Myanmar’s exports to the bloc.

Both the United States and the European Union want to spur economic development to underpin democracy and diminish China’s influence. Crushing the economy with trade sanctions could allow China to dominate Myanmar, officials said.

Some European companies have already cut business with Myanmar, with Cartier stopping purchasing gemstones from the country on December 8, 2017, citing abuses against the Rohingyas.