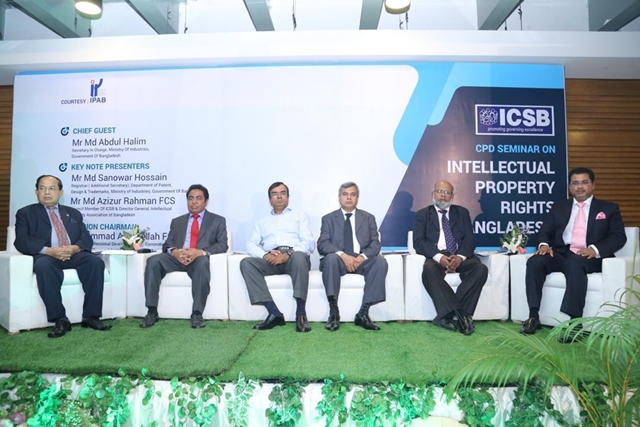 Regular violation of intellectual property rights (IPR) has emerged as a serious economic burden for Bangladesh that cost the country Tk 70 billion a year, officials and experts said on Saturday.

In a CPD (continuing professional development) seminar, arranged by Institute of Chartered Secretaries of Bangladesh (ICSB), they also came up with an estimated value addition amounting to Tk 500 billion, which can be injected into the economy in a span of 10 years through proper enforcement of the IPR.

Highlighting the need for digital intellectual concept to combat such commercial fraudulences, they feared that the failure could affect investor's confidence as well as crating a scope for terrorist financing.

ICSB in collaboration with Intellectual Property Association of Bangladesh (IPAB) organised the seminar at Dhaka Club in the capital.

Presenting a paper on how the matter impacts the economy, IPAB director general Md. Azizur Rahman said Bangladesh is losing Tk 70 billion of annual revenue due to breaching of the IPR.

He said various unscrupulous quarters are importing substandard or fake products taking the advantage of weak regulatory enforcement and market those paying no heed on human health.

"This is a huge consumer market where anything can be sold," he said.

Sharing a study the IPAB made after analysing 28 sectors in Bangladesh, Mr. Rahman said the country can generate value addition worth Tk 500 billion within the next one decade by enforcing IPR.

He laid emphasis on introduction of mobile-based digital intellectual concept that will enable the consumers check product details.

Registrar of department of patent, design and trademark Md. Sanowar Hossain said people of Bangladesh are not conscious about the intellectual property assets, which accounts for three-fourth of the assets of the globe.

"We always talk and fight about tangible assets," he said.

Giving short briefing over the IP, he said businesses can apply for trademark even before starting their businesses but they have to start it within five years of receiving trademark certification.

"The violation of the IPR is costing the country heavily. Government cannot address the problem alone. We need support from private sector and common people in particular," he said.

ICSB president Mohammad Sanaullah, among others, also spoke at the seminar.

Former president of ICSB Asad Ullah FCS further elaborated that since, the Members of ICSB are professionally fit and competent, both ICSB and Department of Patent, Designs and Trademarks may choose to jointly explore the avenues for cooperation for mutual benefits.

To materialise the joint cooperation approach, necessary amendments should be made to the Trade Mark Act and Rules, so that the Chartered Secretary professionals could make better contribution to the national economy.