Runa Laila in a new light 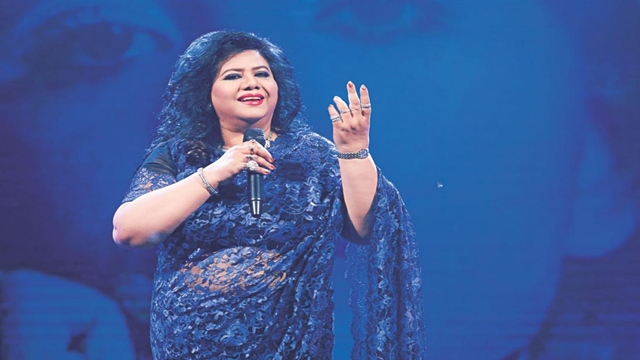 I had never really planned on this. It happened in the spur of the moment. Ankhi Alamgir talked me into this. She said, “In your musical career, you sang different songs. How about composing a song for me?” I replied, “It is not easy to give a tune to a song. Just because I can sing, doesn't mean I can compose”. One day, while enjoying my leisure time at home, a melody came to my mind and I recorded the prelude on my mobile phone. When Alamgir Shaheb returned home in the evening, I asked him to listen to my composed piece. I was hoping for a remark, or at least a rating for good or bad; but he said nothing. I was disappointed, and I thought maybe he did not like it because if it was any good, he would have said something. At that time, a movie Ekti Cinemar Golpo was being produced by Alamgir Shaheb. After two or three days, he asked me, “Did you compose the interlude of the song?” I replied, “I decided to not work on it further, since you did not make any comment, the other evening.” He then told me to complete the interlude and later, when I was done, he listened to it. This time he said, “I have a sequence in my movie where I would like to incorporate your composition. My composition was sung by Ankhi Alamgir, and the song had a wistful tone to it, since it was melancholic in nature. After that, whenever I conjured up a tune or melody in my mind, I always recorded it.

Rafi: Did you have a habit of doing this previously?

Runa: No, I did not do this earlier. It all started unexpectedly. I recorded five songs and I believe that if I am able to offer my composed tunes to the upcoming singers to sing, it will be very beneficial for them. I want do this, so that they can get better opportunities and also help them gain more exposure. I always try to do as much as I can for the new generation of artists. I wanted my songs to be made properly, and released under a good audio label company. So, I asked one journalist about it, and I was informed about Dhruba Music Station. Later, I contacted them. The company's owner, Dhruba himself is a singer, which is why he was able to understand and present the songs in a professional manner. They gave me the space I needed to execute my creative freedom. I want everything to be done perfectly, and I really liked their style of work and their approach.

Rafi: How many songs did you compose?

Runa: I have composed a total of five songs for this project. The lyrics of two of the songs were written by Gazi Mazharul Anwar and the other three were written by Kabir Bakul. Three of the songs were sung by upcoming young singers, Luipa, Haimanti Rakhshit Das and Ankhi Alamgir. Even my daughter, Tani will sing one of the songs. I, myself, will render my voice for one of the songs, based on the producer's request. The voice recording was done in Dhaka at the wonderful studio owned by the band, Chirkut. The five tracks were recorded in London, and done by Raja Kaasheff, with international musicians. Further, under Raja Kaasheff's supervision, sound engineers, Emon and Anik have done a superb work. Raja has undoubtedly, done a fantastic job with all the tracks. All these songs have been recorded for Dhruba Music Station.

Rafi: When do you plan to release the songs?

Runa: My song will be released first, but I cannot surely say when. I just recorded the song; we are yet to shoot the music video and complete other post-production tasks. Dhruba wants to execute the project perfectly, and I believe he will do an amazing work. The songs are semi-classical, and I want these songs to influence the musical taste of the listeners. I have composed each of the songs with this thought in my mind.

Rafi: Do you plan to compose frequently?

Runa: I am not entirely sure about it, but let's see what's down the road. If I am given my creative liberty, just like Dhruba did, then I might consider and think about it. I really enjoyed working with him and he did give me my creative freedom. However, I have a few plans, so I will take my time.

Rafi: You have a very good relationship with artists around the globe. They respect you and your work. They see you as the representative of Bangladesh. Do you have any plans on collaborating with foreign artists?

Runa: I think, creating composition based on lyrics is difficult, and I am more comfortable with making a composition first, to be followed by the lyrics.