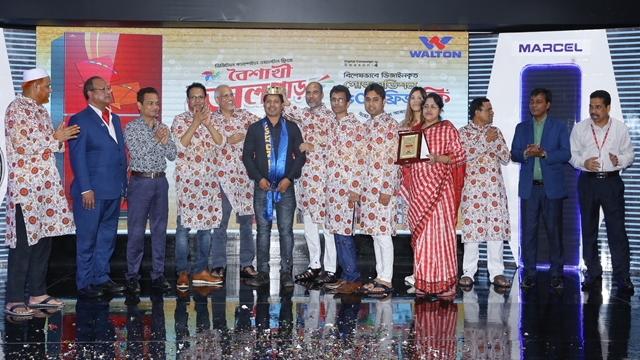 The country’s electronics giant ‘Walton’ registered 93 percent growth in the sales of its wide ranges of fridges during the first quarter (January to March) of 2019 compared to the sales of the corresponding period of the previous year.

Walton officials disclosed the data at an ‘Achievement Celebration Programme,’ arranged following the outstanding growth in fridge sales at the company’s Corporate Office in the capital on Wednesday (April 17).

At the function, total of 12 area managers of the company were honoured with Best Achievement Award while one of them awarded with ‘Warrior of The Month.’

Prior to that programme, another programme ‘Meet the Managers’ was held at the same venue.

Walton Fridge’s Product Manager Md. Shahiduzzaman Rana said, Walton sold out total of 1,12,317 units fridge in this year’s January and the figure was increased to 1,55,787 units in February and 1,66,139 units in March.

At the event, Walton officials said, they released new models of frost and non-frost refrigerators of inverter and glass door at the beginning of the year.

Under the digital campaign season 4, customers are getting sure cash vouchers up to Tk 1 lakh or free appliances such as laptop, refrigerator, TV, AC etc. by registering their fridges during the purchase from any Walton Plaza or distributor’s outlet across the country.

Along these benefits, customers of Walton fridges are now enjoying 12 years guaranty on compressors as well as one-year replacement guaranty.

As a result, Walton fridge has been turned into ‘hot cake’ in the domestic market, the officials noted.

Walton Executive Director Uday Hakim said, Walton set a target of selling out two million units of fridges in the local market. To achieve the target, they undertook timely and strategic working-plans in everywhere, ranging from the production process to marketing.

New models of fridges, featured with huge energy efficient, environment-friendly and innovating designs are released, and they are also conducting campaign across the country, mentioning it he noted that these initiatives led the company to register outstanding growth in its fridge sales in every month of the current year.

At now, Walton is supplying 101 models of frost and 20 models of non-frost refrigerator, 16 models of freezer and 2 models of beverage cooler.

The ‘Made in Bangladesh’ labelled world-class Walton appliances are being exported to different countries of the Asian, Middle Eastern and African regions.

Now, Walton have greatly focused on exporting to the potential markets of the world’s developed nations like Australia, America and Europe.

High officials of Walton Hi-Tech Industries Limited attend an ‘Achievement Celebration Programme’ at the at the company’s Corporate Office in the capital on Wednesday (April 17).