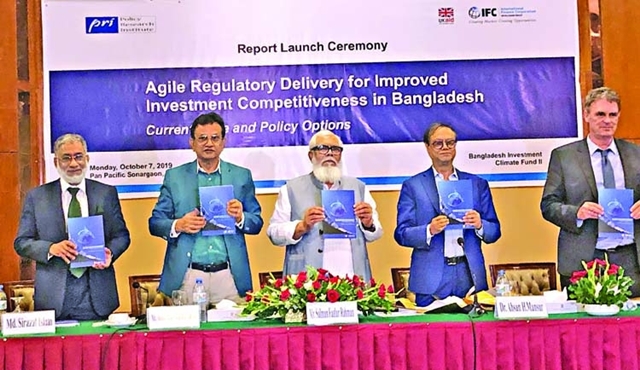 The government is going to amend the company and bankruptcy laws to facilitate the best investment environment for business, an aide to the Prime Minister said on Monday.

Salman F Rahman; Private industry and investment advisor to Prime Minister said the government has taken a lot of initiatives to improve the ease of doing business index.

"We will achieve this by the end of the next year," the advisor said while speaking at a report launching programme.

The Policy Research Institute (PRI) in collaboration with the International Finance Corporation (IFC) organised the programme at a hotel in Dhaka to launch the report titled "Agile Regulatory Delivery for Improved Investment Competitiveness: Current State and Policy Options".

He said export diversification is a must for Bangladesh.

Mr. Rahman said the government is planning to provide similar tax benefits and bond facilities to all export earning sectors like those of the readymade garment sector.

He said the government will introduce a database for the freelancers by next January.

The report has made a set of policy recommendations, including simplifying the standard operating procedures, introducing automation, amending laws for innovative business, etc.