Sanofi threatens protesters of ‘no pay for no work' 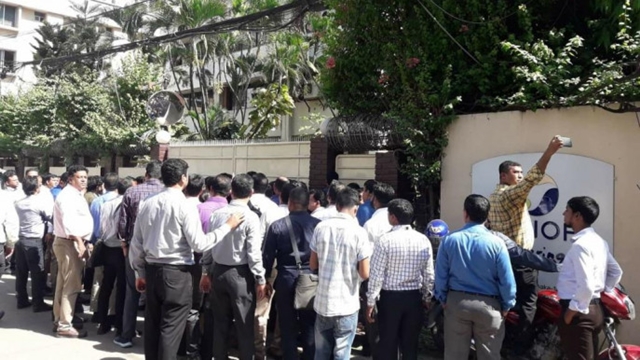 Multinational pharmaceutical company Sanofi Bangladesh has warned its protesting employees of "no pay for no work" if they do not go back to work immediately.

The biopharmaceutical giant today issued the warning after its employees on Sunday gave a 72-hour ultimatum demanding compensation as the company is going shut down its operation in Bangladesh.

The employees also threatened of going on a symbolic hunger strike at the company's headquarters on October 31 if their demand is not met, said Sanjib Chakrabarty, general secretary of Sanofi Bangladesh Employees Welfare Committee.

However, the company threatened in a letter to all employees that it will consider action like the stoppage of employees' monthly salary as well as daily and transport allowances.

About the employees' protest, Sanofi authority said, "This behaviour is not acceptable and will not be tolerated."

On early morning of Monday, the protesting employees were barred from entering the head office of the company in Dhaka, Sanjib Chakrabarty added.

Sanofi has around 1,000 employees, and many local sellers are directly associated with the business in Bangladesh.