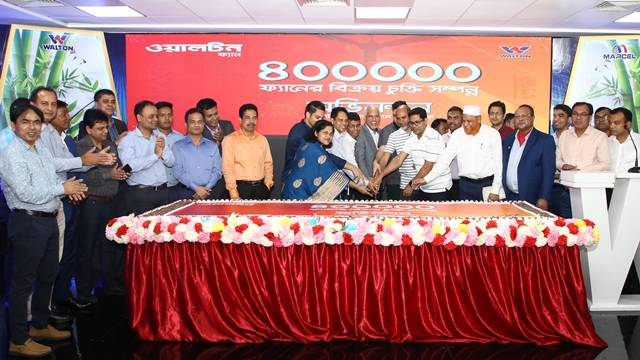 Walton Plaza, one of the sales networks of Walton Group, in a single day has
received sales order for 4 lakh unit electric fan from its dealers across the country.
The Walton Plaza dealers made this order right now so that they could smoothly
meet the growing demands for Walton brand electric fan, including ceiling, wall,
table, rechargeable, pedestal and exhaust fan, during the next summer.

The local brands noted that comparatively higher air delivery rates, durability,
energy saving and reasonable prices of Walton and Marcel fan are resulted in
receiving such a huge volume of sales order.
Walton sold out around 6.13 lakh units fan during the month of January to October
of the current year, registering a 90 percent higher sales compared to previous
year’s corresponding period.

Centering the next year’s summer season, the local multinational electronics
company set a target of selling out 15 lakh units fan. To achieve this target, they
started ‘Pre-Sales Booking’ of electric fan in last week of October.
With the advent pre-sales booking, Walton received sales orders for more than 7.5
lakh unit electric fan in two days.

Walton Electrical Appliances’ Chief Executive Officer Sohel Rana said that they
are manufacturing different sorts of electric fan with state-of-the art technologies
and machineries of Germany, Japan and Taiwan.
Their produced fans are up to the International Electro-technical Commission
(IEC) standard, mentioning it he noted that thus, ‘Made in Bangladesh’ tagged fan
produced in Walton Micro-Tech Industries are being exported.

He informed that use of aluminum in the blades and body of Walton ceiling fan is
resulted in upholding the initial design of the fan’s blades and thus the fan delivers
same air flow from its beginning to end. And, the life time of the fan is
comparatively higher. For the first time in Bangladesh, Walton is applying inline
copper varnishing process in the fan’s motor to ensure super quality. The use of
99.99 percent super enameled copper and H-class insulation in the fan’s armature
have protected Walton fan from burning for high voltage. Speed of the Walton fan
is being sustained due to the use of European standard boll-bearing and capacitor
of Japanese brand.