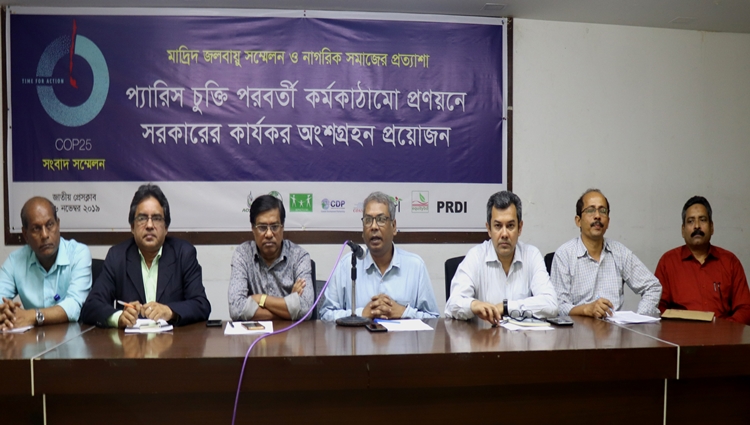 They also recommended the government for an effective role on the above issue, along with raising their voice to ensure easier financial access to GCF as MVC (Most Vulnerable Country).

CSOs made these demands in a press conference today, towards the upcoming CoP 25 Climate Conference, being held in Madrid, Spain from 02-13 December 2019.

In the keynote presentation, Aminul Hoque said that the CoP 25 climate conference very important for our government, because an implementing guideline especially “Article 06 of Paris Agreement (PA)” is going to framing that will be followed by all countries in their NDC (National Determined Contribution) compliance on market-based mitigation action.

Apart from the issue of WIM and “Loss & Damage” will also review for next mandate of work which is very prospective for Bangladesh saving country interest as a climate-vulnerable country.

Following the context, he made four demands. Those are i) Developed countries that must increase their Mitigation action target based on the latest IPCC report on reducing global warming, ii) The framework on implementing market-based mechanism on “Mitigation Outcome International Transfer”(Article 6 of PA) must be developed under UNFCCC Process and followed by accountability, Transparency principle, iii) Ensure easier access to GCF (Green Climate Fund) for most vulnerable countries without any condition and co-financing and iv) Review the WIM and develop separate workstream on Displacement and Migration issues to make it fully operationalize in view of real support to vulnerable countries.

Apart, a few opinions and recommendations also made by CSO representatives in the press conference; Kawser Rahaman said, government preparation is yet to visualize and no discourse found with CSO and other stakeholders as well.

He urged govt. to ensure more inclusion civil society representatives like before to strengthen country position in both inside and outside of the climate conference. This is very important in the current context as MVC interest need to save.

Md. Shamsuddoha said that GCF has been changing its rule & process frequently bypassing its funding principle which is a problem for MVCs. Now access to GCF is very complicated and we off course take a position on this issue in CoP 25.