US, China agree to keep pressure on North Korea 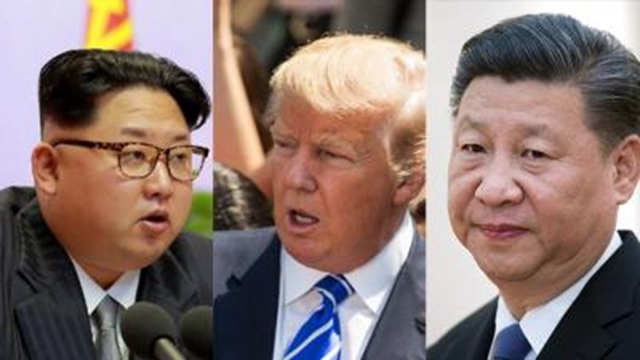 Donald Trump enlisted Friday the help of China's Xi Jinping to keep sanctions pressure on North Korea, amid fears that an audacious diplomatic gambit by the US president could lead to backsliding.

In an evening tweet, Trump praised a possible future agreement with the communist North as "very good" for the international community as a whole, after the US leader stunned the world by accepting an invitation to meet Kim Jong Un before the end of May. "The deal with North Korea is very much in the making and will be, if completed, a very good one for the World. Time and place to be determined," Trump wrote.

During a telephone conversation, Trump and the ever-more-powerful Chinese president committed to "maintain pressure and sanctions until North Korea takes tangible steps toward complete, verifiable, and irreversible denuclearization," according to the White House.

As aides scrambled to catch up with Trump's decision -- taken before consulting key confidantes -- the White House sent mixed messages about conditions.

"We're not going to have this meeting take place until we see concrete actions that match the words and the rhetoric of North Korea," she told reporters.

Officials behind the scenes said this did not constitute a change of heart.

A day after the bombshell announcement that the US and North Korean leaders would meet, Vice President Mike Pence said the White House would keep "maximum pressure" on Pyongyang and claimed US efforts to isolate Kim had been vindicated.

There has been limited reaction from Kim's regime, but South Korean President Moon Jae-in said news of the summit -- announced by his national security advisor on a visit to Washington -- was "like a miracle."

For his part, Xi urged the two leaders to begin talks as "soon as possible" and praised Trump's "positive aspiration."

China has long been North Korea's most important ally but has been on board with the sanctions agreed at the United Nations.

A cryptic report by South Korean news agency Yonhap said the South's envoys also delivered a "special message" to Trump from Kim during their US trip, but did not elaborate on what was said.

China and Russia argue that sanctions alone will not push North Korea to change course and have repeatedly called for stepping up diplomatic efforts to achieve a solution.

The summit announcement triggered a rise in global stock markets while world leaders voiced hope the meeting would deflate tensions that had been building dramatically in recent months.

Some observers questioned the US president's wisdom in granting Kim a long- standing wish for a meeting after only agreeing to temporarily halt nuclear tests.

Bill Richardson, a former US ambassador to the United Nations who has negotiated with and traveled to the North, told newsmen it was a bold move that is "worth taking" but also a "huge gamble".

"This is not 'The Apprentice' or a reality TV event... It's a negotiation with an unpredictable leader who has at least 20 nuclear weapons and who threatens the United States," he said.

"There is no greater diplomatic tool or lever than the President of the United States," he added. "If this doesn't succeed how much is left of that diplomatic runway is a very good question."

Trump has previously ridiculed Kim as "Little Rocket Man," imposing wide- ranging bilateral sanctions on the Pyongyang regime and also leading a drive for international sanctions through the UN. Pyongyang has hit back by calling Trump a "dotard".

Pence stressed that the White House has made "zero concessions" to get Kim to the table and emphasized that the sanctions would remain in place.

German Chancellor Angela Merkel was among the world leaders to hail the announcement as a "glimmer of hope," saying North Korea's nuclear drive "has been a source of great concern for all of us."

Pyongyang's long race to develop a nuclear weapon capable of reaching the United States has proved a problem for successive US administrations.

But the alarm bells have been ringing even louder since July, when Pyongyang conducted two intercontinental ballistic missile tests, declaring the entire United States now within range.

Trump threatened "fire and fury" if Pyongyang continued to threaten the United States, only for North Korea to carry out its sixth nuclear test.

The US and North Korea fought on opposite sides of a war in the 1950s, and in the last two decades have been engaged in perhaps the world's most dangerous nuclear standoff, with 30,000 US military personnel stationed just over the border in the South. afp