Celebrities who have tested positive for coronavirus 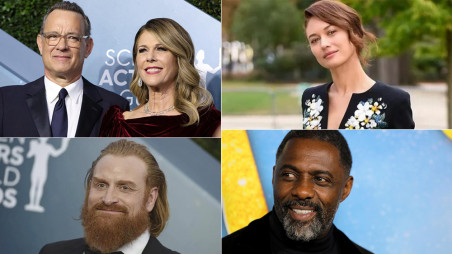 growing number of celebrities and athletes have been infected with the COVID-19 outbreak.

Idris Elba and 'Game of Thrones' star Kristofer Hivju both confirmed they tested positive for coronavirus on March 16, urging their millions of followers to keep calm and carry on while abiding by health officials' plan to prevent the spread of the pandemic.

Last week, Tom Hanks and Rita Wilson were among the first celebrities to go public with their diagnosis. "Thanks to the Helpers," the Oscar winner shared on Twitter, referencing a classic Mister Rogers quote, who he brought to life in the 2019 film 'A Beautiful Day in the Neighborhood'. "Let's take care of ourselves and each other."

The 63 year old Oscar winner Tom Hanks was the first celebrity to announce through their instagram account that he and his wife have been infected with Covid-19 on March 12th. The couple—who sign each post with "Hanx" kept their fan updated about their health through social media. As of now, the actor and his wife have been released from the Australian hospital.

The 'Quantum of Solace' actor revealed she has tested positive in an Instagram post on Sunday, March 16. "Locked up at home after having tested positive for Coronavirus. I've actually been ill for almost a week now. Fever and fatigue are my main symptoms. Take care of yourself and do take this seriously," she wrote in the caption.

The 47 year old "Luther" star announced via video on March 16 that he tested positive for coronavirus after coming in contact with someone who had it. Elba, explaining that he didn't have any symptoms, said, "...Now's the time to really think about social distancing, washing your hands. Beyond that, there are people out there who aren't showing symptoms and that can easily spread it."

Kristofer Hivju, known for playing Tormund Giantsbane on HBO's Game of Thrones, revealed on Instagram that he's tested positive COVID-19 and will be self-isolating at home "for as long as it takes."

"[My family and I] are in good health," he wrote in the post's caption. "I only have mild symptoms of a cold. There are people at higher risk for who this virus might be a devastating diagnosis, so I urge all of you to be extremely careful; wash your hands, keep 1,5 meters distance from others, go in quarantine; just do everything you can to stop the virus from spreading. Together we can fight this virus and avert a crisis at our hospitals. Please take care of each other, keep your distance, and stay healthy!"

NBA player Rudy Gobert of the Utah Jazz tweeted last week that he had tested positive for COVID-19. In his original post, he apologized for touching every microphone and recorder in front of him at a media event earlier this month as a joke.He has since shared his progress on the official NBA Twitter account, saying he is feeling "a little better".

Chelsea winger Callum Hudson-Odoi has tested positive for coronavirus as the pandemic continues to strike the sporting world. Chelsea said the full men's team squad, coaching staff and a number of backroom staff would self-isolate after Hudson-Odoi returned a positive test.

Arsenal confirmed  that their Spanish head coach Mikel Arteta has tested positive for coronavirus and the entire Gunners first-team squad would be placed into self-isolation. Hours later the Premier League, acting on government advice, said that all this weekend's fixtures would be postponed.

Canadian prime minister Justin Trudeau's office reported last week that the P.M.'s wife, Sophie, has tested positive for COVID-19. "She is feeling well, is taking all the recommended precautions and her symptoms remain mild," Trudeau's office said in a statement. Justin Trudeau is currently taking doctors' advice by undergoing 14 days of isolation.