PM vows to ensure free Covid-19 vaccination for all 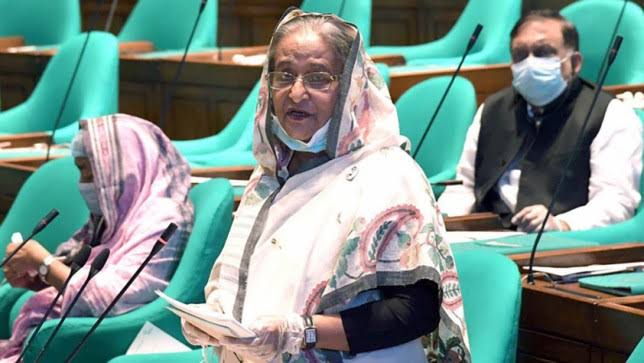 Prime Minister Sheikh Hasina has said the government will not hesitate to spend funds on collecting coronavirus vaccines to bring all citizens under inoculation coverage for free.

“We’ve announced that the government will ensure free vaccination for all citizens of the country. For this to happen, we will give as much money as necessary to procure the vaccines,” she said in parliament during a discussion on the proposed budget for fiscal 2021-22 on Tuesday.

The government has so far collected over 11.4 million doses from various sources and allocated Tk 142 billion in the budget for vaccines for the next fiscal year.

“The government launched the initiative to collect vaccines from across the world, when the researches to develop the doses began, even before the World Health Organization’s approval for the vaccines,” she said.

“It is unfortunate that coronavirus infections surged in India suddenly, prompting the country to halt exports. We are facing a temporary problem for that, but by the grace of Allah, we’ve secured vaccines. There will be no problem now.”

After India halted vaccine exports to tackle its own crisis, Bangladesh suspended the immunisation drive. The government is yet to get enough Oxford-AstraZeneca shots to complete second doses of all the citizens who had received the first.

Now it is trying to collect vaccines from other sources. It has received 100,620 doses of the Pfizer-BioNTEch vaccine under the WHO-led global sharing platform COVAX, and 1.1 million Sinopharm doses from China as gifts.

It has also approved a proposal to buy 15 million Sinopharm doses from China. The doses are expected to arrive in June, July and August – five million doses a month.

Health Minister Zahid Maleque recently said the government is expecting 2.5 million doses of Moderna doses from the US under the COVAX facility soon.

Hasina said the government has continued communication with the countries and companies producing vaccines.

“We hope more vaccines will arrive in July and we will be able to give the doses on a large scale.”

The prime minister said her government is prioritising Bangladeshi migrant workers for vaccination so that they do not face quarantine or embargo at their workplaces abroad.

The government plans to inoculate 80 per cent of the population. It will administer the doses to all age groups permitted by the WHO – from students of schools to universities, said Hasina.

“We are taking steps so that we can reopen the educational institutions.”

In the new budget, the government has allocated Tk 327.31 billion for the health and family planning sector, an 11.92 percent rise from the previous year’s allocation, Hasina said. It also announced an emergency fund of Tk 100 billion during the pandemic.

To ensure healthcare, the government has appointed thousands of doctors and nurses, and bought equipment. “These efforts will continue.”

Hasina also noted that the government has created a Tk 1 billion fund for medical research.