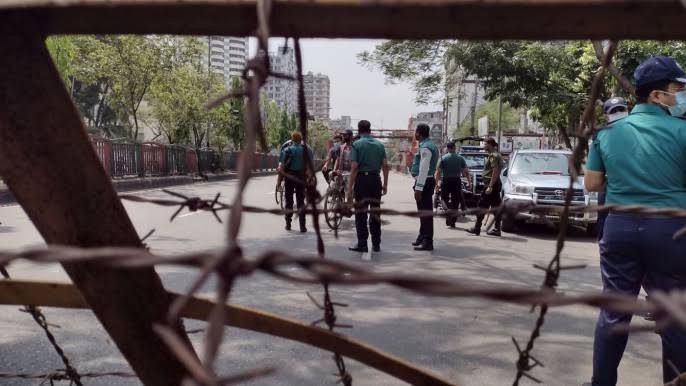 Police detained 373 people and arrested 76 from different areas of the capital till 5 pm on Thursday on charge of violating lockdown restrictions.

Police took such steps by patrolling, setting up check-posts and mobile courts in areas including Mohammadpur, Mirpur, Tejgaon and Hatirjheel.

Most of the detained could not show any logical reason to be outside, police said. Some said they went out to see how the lockdown was going and some said they do not know about the lockdown.

Police said they detained 4 in Wari ,55 in Romna, 232 in Tejgaon, 75 in Mirpur and 7 in Gulshan for failing to provide any valid reason to come outdoors.

Meanwhile, 274 vehicles were sued and fined Tk 463,050 for breaching the lockdown during this time. Forty six vehicles were also seized.

On the other hand, mobile court sentenced eight people during this time and fined a huge number of individuals and business institutions on the first day of a tougher lockdown .

Earlier in the day, Dhaka streets wore a deserted look as Bangladesh entered a stringent lockdown on Thursday with law enforcers on patrol to enforce the restrictions.

Army personnel were seen patrolling the city streets in aid of the civil administration.

Police set up barricades and check-posts at all important points of the city to monitor the movement of vehicles as well as people. So, most roads in the capital were found almost empty with fewer private vehicles moving.

The government has given executive magisterial powers to 106 more officers to make sure people stay at home.

If anyone comes out without an urgent need, they have to face interrogation at the check post. They might even be fined or sentenced to imprisonment.

The magistrates said detaining, fining or imprisoning are not their main motives. They are working to ensure social distance to prevent the spread of coronavirus.