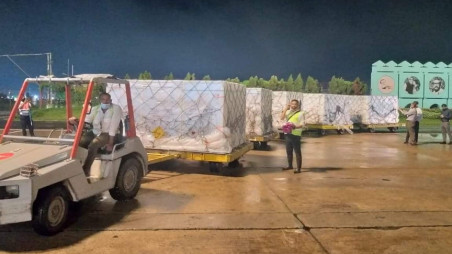 One-third of the third consignment of Sinopharm’s Covid-19 vaccine doses has arrived in Bangladesh from China.

A special flight of Biman Bangladesh Airlines, carrying one million doses of the vaccine, landed at Hazrat Shahjalal International Airport in Dhaka at 10:20 pm on Thursday, according to a press statement issued by Biman.

Two other special flights of the national flag carrier are scheduled to arrive in Dhaka with the rest of the consignment – two million doses – on Friday morning.

Earlier on Thursday, the three Boeing Dreamliners of Biman – one 787-9 and two -787-8 – left Dhaka for Beijing Capital International Airport in China to bring the three million doses of Sinopharm vaccine – the third consignment of purchased vaccine from China.

Bangladesh initially signed a deal to purchase 15 million doses of vaccines from Sinopharm, which was expected to be delivered within three months.

After the fresh agreement, Bangladesh received 2.5 million doses of vaccines.

Besides, China sent 1.1 million Sinopharm doses as a gift to Bangladesh in two consignments in July.

Bangladesh is mainly administering the Sinopharm vaccine at the upazila level or in areas outside the jurisdiction of city corporations.