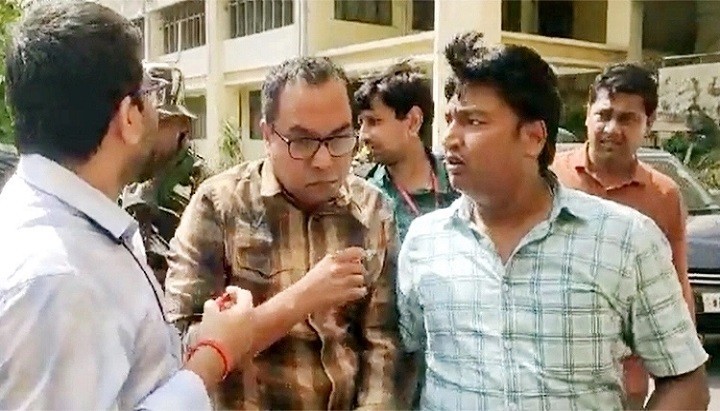 Prashant Kumar Halder, who has been put on remand after his arrest in India on charges of embezzling a huge amount of money, wants to return to Bangladesh.

He expressed the hope while talking to journalists when he was entering the Directorate of Enforcement (ED) office in West Bengal on Monday.

During interrogation on his three-day remand in the ED office, PK Halder broke down in tears.

However, he said that all the allegations brought against him are false.

PK Halder was arrested in West Bengal of India on charges of embezzling around Tk 3,500 crore.

"The matter of arrest of PK Haldar has been raised in the high court. The court later ruled that anyone involved in money laundering would not be exempted."

The court further said that no matter how big the ‘raghab’ is, it won’t be waived.

At the same time, the court expressed satisfaction over the incident (arrest).

"The High Court has ruled in favour of PK Halder's arrest - our message is clear, our policy against corruption and money laundering is zero tolerance," the state counsel was quoted as saying.

“Any kind of corruption and money laundering will not be tolerated. None of them will be spared. We are very serious about the corrupt and the money launderers."

The lawyer was present in the court on behalf of the Anti-Corruption Commission (ACC).

Meanwhile, a top ACC official told journalists that PK Halder had been arrested on the basis of information that the commission had gleaned during its investigation and provided to the Indian authorities.

The Interpol issued a red notice against PK Halder in January last year at the request of Bangladesh.

PK Halder, who was accused in multiple cases filed over misappropriation of money, was found hiding in a house in Ashoknagar in North 24 Parganas province, according to the Indian media.

PK Halder had been posing as an Indian citizen by the name of Shibshankar Halder, the ED said in a statement.

On March 1 last year, he fled Bangladesh through Benapole land port in Jeshore.

Despite facing legal action over financial irregularities at home, Halder continued his illegal activities during his stay in India.

The ED has ascertained that PK Halder and his associates managed to float companies in India on the basis of fraudulently obtained identities and even purchased immovable properties at various places, including in the upscale areas of Kolkata metropolis.

The ACC has sent a letter to the Interpol to bring Halder along with his five associates back to Bangladesh.

ACC Secretary Mahbub Hossain made the remarks at a media briefing at ACC headquarters in the capital on Monday.

He said the commission is continuing its legal efforts to bring the accused back to the country.

After receiving information about the arrest of six people including PK Halder in India, an email was sent from Interpol National Central Bureau (NCB) in Bangladesh to the NCB in Delhi to extradite the accused from India.

Mahbub Hossain further said ACC will take some other steps to bring the accused back to the country - a letter would be sent to the Ministry of Foreign Affairs and the Bangladesh Embassy in India regarding repatriation.

The anti-corruption watchdog will send a letter to Bangladesh Financial Intelligence Unit (BFIU) to collect the money and bank account information of the accused.