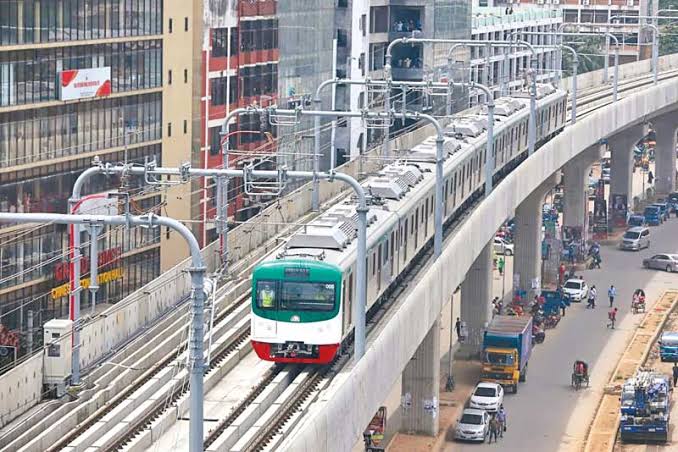 The team has showed that the MRT-5 route will require $4.04 billion as its construction cost and $1.01 billion as indirect cost, including the costs of environmental management, engineering services and project management.

The Dhaka Mass Transport Company Limited (DMTCL) is going to undertake the MRT-5 (southern) route project for constructing the metro-rail line from Gabtoli to Dasherkandi in the capital, they also said.

The MRT-5 (southern) route is an extension of the MRT-5 (northern) route, whose construction project has already started.

The northern route will be built from Hemayetpur, the western part of the capital, to Vatara, the eastern part.

The MRT-5 southern route will be the third initiative of the government after taking up the ongoing metro-rail projects, including MRT-6, MRT-1 and MRT-5 (northern) routes.

The Manila-based lender ADB has already assured the government of financing the MRT-5 (southern) route.

The DMTCL has already started construction of the northern route at a cost of Tk 412.38 billion, which is expected to be completed by December 2028.

According to the feasibility study, the DMTCL will split the proposed $5.05-billion cost MRT-5 (southern) route project into nine procurement packages to complete its construction works.

A DMTCL official said they are scrutinising the feasibility study report, submitted by the consultant.

Based on the study, a detailed design will be carried out to select the route map and its necessary work-plan.

"We have a plan to complete the MRT-5 (southern) route construction works by 2030."

There is conflict (of the route) with other metro-rail lines and elevated expressway in some areas of the city, which has been addressed in the final feasibility study of the proposed project.

The complexities at Tejgaon, Hatirjheel, Niketon and Aftabnagar have already been managed in the feasibility study, the DMTCL official added.

It has also suggested setting up multimodal transport hubs as well as Gabtoli and Dasherkandi stations.

Meanwhile, the DMTCL is also constructing two other metro-rails - the MRT-6 from Uttara to Motijheel and the MRT-1 from Airport to Kamlapur.