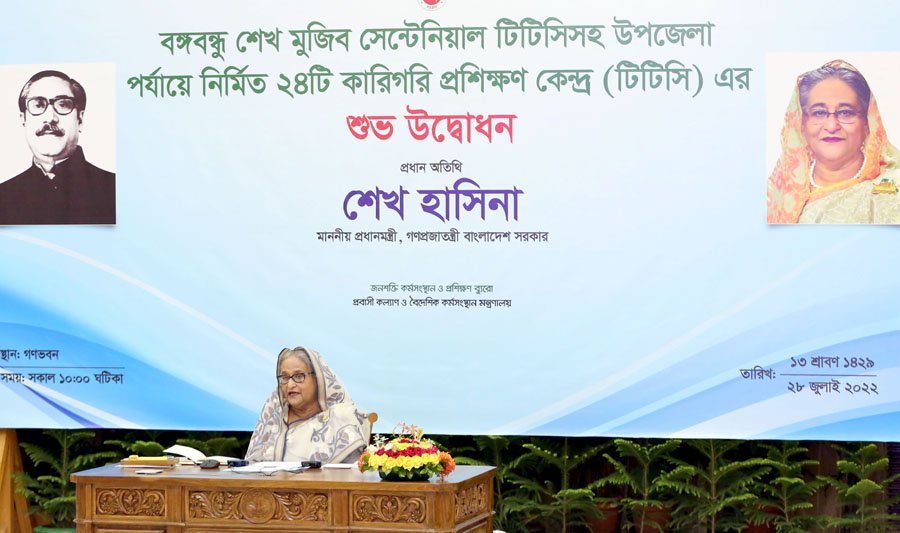 Prime Minister Sheikh Hasina has underlined the need for focusing on export to earn foreign currencies instead of depending on remittance.

"We have to more focus on export to earn foreign currencies instead of only depending on remittance," she said.

She was inaugurating 24 Technical Training Centres (TTCs) including Bangabandhu Sheikh Mujib Centennial TTC at the upazila level, joining virtually from her official Ganabhaban residence in Dhaka on Thursday.

The Bureau of Manpower Employment and Training (BMET) organised the function at the Osmani Memorial Auditorium in city.

"We have to take initiatives to earn foreign currencies by making local products multidimensional to find out fresh markets abroad," she said.

The premier said some people of the country are making illogical comments and spreading rumours about the foreign currency reserve, adding it is common that the reserve would be more or less.

"I believe, it is enough to have foreign currency reserve to purchase food for three months," she continued.

But, she said Bangladesh has to shrink dependency on other countries for consumer products and food items.

"We can utilise properly the people and fertile lands we have. We have to modernise the process of preserving foods and establish food processing industries largely," the prime minister said.

In such way, the demand of the local markets would be fulfilled and locally made products can be exported to earn foreign currencies, she added.

Terming the Ukraine-Russia war as meaningless Prime Minister Sheikh Hasina on Thursday said only arms producers are profitting from the conflict.

“…this war is meaningless. Because we are witnessing that only the arms producers are making profits. The lives of the general people are endangered,” she said.

Hasina said that this war comes with sanctions and counter-sanctions threatening the global economy.

“Developed countries are facing severe problems. They have now started to save electricity and fuel oil, they are in anxiety about food security and taking various steps for that,” she said.

The premier said that countries like Bangladesh which have started a journey towards a specific goal to become developed is facing severe hurdles due to this war.

“This is very much regretful. But we must not stop our advancement,” she said.

The PM mentioned that the war struck when the world was facing coronavirus pandemic and resultant economic recession.

“To save the fuel oil all countries have taken various types of initiatives and we are also following that,” she said.

A documentary on the TTCs was screened at the function.