Lax monitoring blamed as quarantined people move around at will 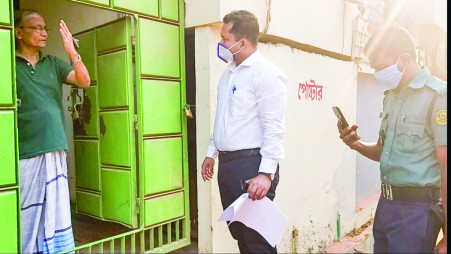 As per government instructions, he was supposed to keep himself in complete isolation at home for 14 days upon his return to the country. But, violating the rules of home quarantine, he went on moving around from one place to another.

When informed of the matter, a mobile court led by Hathazari Upazila Nirbahi Officer (UNO) Ruhul Amin fined him Tk10,000 on Wednesday.

Like Sajjad, most returnee expatriates in the district are not abiding by the rules of home quarantine.

Sources in the Civil Surgeon's office said 11 expatriate returnees were kept in home quarantine on Thursday to prevent the spread of the novel coronavirus. With this, the number of people sent into home quarantine in Chattogram district has reached 102.

Locals think the people in home quarantine are not adhering to the health instructions and quarantine rules because of lax monitoring by the authorities concerned.

As a result, the local people are worried about a potential outbreak of the deadly viral disease in their area.

Zahir Ahmed, a resident of Mirzapur village, said, "This virus did not exist in our country.  Those who have returned from abroad have carried it into the country."

Meanwhile, Shahed Talukder of Patiya upazila said, "Around 10 expatriates have returned to our Kulgaon union after the coronavirus outbreak. But we have not seen any of them following the rules of home quarantine."

"The administration too has not taken any action against them," he claimed.

For his part, Chattogram Deputy Commissioner Ilias Hossain said, "Those who are in home quarantine are being monitored. The authorities concerned have been given necessary directives to take stern action against anybody who violates the quarantine guidelines."

"During the drive, we found him moving around in public and fined him Tk10,000," he added.

Meanwhile, the Sitakunda upazila administration on Wednesday warned a US-returnee as they were earlier informed by the returnee's son that he was not adhering to the home quarantine rules.

"Most of the returnee expatriates in Chattogram have returned from the Middle Eastern countries and Italy," said Dr Sheikh Fazle Rabbi, civil surgeon of Chattogram.

"We are most worried about those who have returned from Italy as the severity of the coronavirus is most in that country.  Till now only relatives of Italy-returnees have been infected with the virus in Bangladesh. So we are extra cautious about them", he maintained.

He said, "We are regularly updating the district administration about those in home quarantine.

"But people will have to be aware. The situation cannot be brought under control only by fining the offenders. Besides, if a foreign returnee is seen moving around in public the administration has to be informed about it".