First Saudi cinema in 35 years to open on April 18 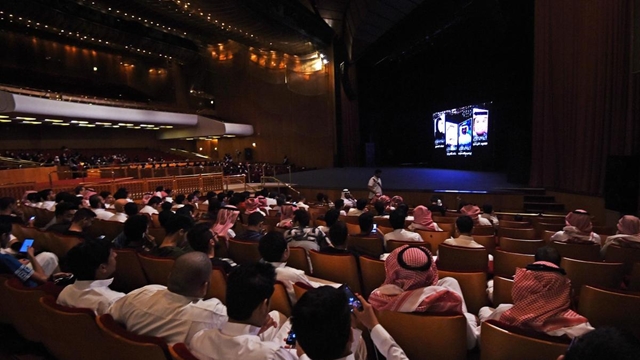 The Saudi Ministry of Culture and Information has signed an agreement with AMC to open around 40 cinemas in 15 cities in Saudi Arabia over the next five years.

The license, the first of its kind, will allow one of the world’s largest film companies, to operate cinemas in the Kingdom.

Under the license, AMC plans to open its first new movie theater in the Saudi capital of Riyadh on April 18.

The company signed a memorandum of understanding with the Public Investment Fund in November 2017 to discuss potential trade cooperation opportunities.

Saudi Arabia, with a population of 32 million, mostly under the age of 30, is expected to be the region’s largest market for movie theaters.

Last December, the Ministry of Culture and Information announced that commercial cinemas would be allowed to operate in the Kingdom starting from 2018, for the first time in more than 35 years.

He pointed out that the Saudi market is large and most of the population is under the age of 30, so they are eager to watch their favorite films in their country.

He added that the goal of the Kingdom’s Vision 2030 is to improve the quality of life by providing additional leisure opportunities. He pointed out that the opening of cinemas will help support the local economy and contribute to the creation of new jobs.

The cinemas will not require men and women to sit separately, a source told Reuters on Wednesday.

Vision 2030 has set a target of raising Saudi Arabia’s annual spending on cultural and recreational activities from 2.9% of total Saudi household spending to 6% by 2030.

Adam Aron, CEO of AMC, said the company is following with great admiration the creative movement of development projects in the Kingdom to open new economic sectors.

“We are looking forward to providing entertainment services that will enable everyone to spend an enjoyable time playing world-class film shows across the Kingdom.

AMC’s entry into the Saudi Arabian market comes in partnership with the Public Investment Fund (PIF) through its wholly-owned Leisure Development and Investment Company.

The move to allow movie theaters to open up a local market with annual ticket sales of up to $1bn is what makes other leading movie chains keen to enter as the largest market in the Gulf region.

AMC Theaters is an American movie theater chain owned and operated by Wanda Group. Founded in 1920, AMC has the largest share of the American theater market ahead of Regal Entertainment Group and Cinemark Theaters. arab news