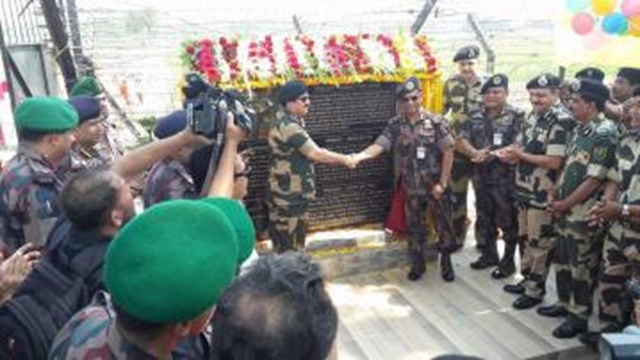 Frontier forces of Bangladesh and India - Border Guard Bangladesh (BGB) and Border Security Force (BSF) - for the first time on Friday announced an 8.3-kilometre area of their common border in Bangaon as a "Crime Free Zone".

Among others, Bangladeshi lawmaker from Jessore-1 constituency Sheikh Afil Uddin, senior journalists of Bangladesh Manzurul Ahsan Bulbul and Naeem Nizam were present on the occasion.

Speaking on the occasion, the chiefs of the border guards of the two nations expressed their hope that the 8.3 km common border area would be a model for the sub-continent as well as the globe.

Appreciating the initiatives of BGB and BSF, Afil Uddin said the frontier forces will make their best efforts to keep the 8.3 kilometer border area free from all sorts of crimes.

The BGB and BSF chiefs said the frontier bodies of the two nations will ensure round the clock vigil in the border areas through mutual assistance and coordination aimed at stopping trans-border crimes such as smuggling of goods, illegal firearms and ammunition, and human trafficking, illegal border crossing.

Both of them stressed the need for collective efforts of all the stakeholders such as - local administration, police and local people -- to let no crime happen in the crime-free zone, and viewed that only the frontier forces of both the nations are capable to uproot the crimes.

They emphasized better border management because of the improved relations between the border guards of the two nations and further strengthening the mutual trust and confidence on each other to explore every opportunity for ensuring citizens' safety through joint efforts.

They reminded the community people that if they gave them authentic information about the criminals and other anti-social elements, they will put in their best efforts to bring them to book.

Both the frontier forces have already installed border surveillance devices such as closed-circuit cameras, search lights and thermal imagers to make the border area a crime-free zone in the true sense of the term.

Jrones will be patrolling along the borders of the two countries for watching the overall security in the crime-free zone.

The idea of announcing some border areas of Bangladesh and India as Crime- Free Zones was the brainchild of the outgoing BGB chief which earned appreciation from his BSF counterpart KK Sharma.

Bangladesh and India have 4156 kilometres common land border of which the southwest region shares 644 kilometres, including 259-km river boundary. The remaining common border areas will be announced as "Crime-Free Zone" gradually.