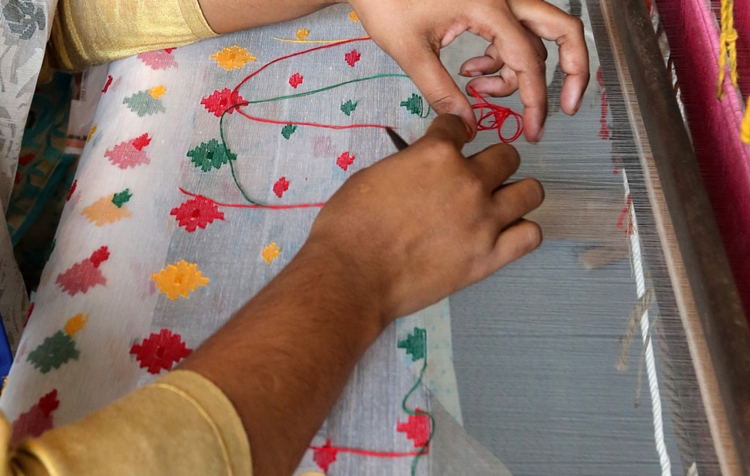 The recognition of Sonargaon, a region not far from Dhaka, as a World Craft City is undoubtedly a befitting tribute to the place.

It was the birthplace of the fabled 'muslin'. Through the ages, its superfine fabric earned fame among the royal and aristocratic societies around the world. After the forced extinction of the fabric engineered by the British colonial rulers, its descendant Jamdani took its place. 'Jamdani' has also been enjoying an adorable status among the womenfolk in search of saris made of specially woven cloth.

Sonargaon had been the capital of eastern Bengal's Sultanate rulers followed by Isa Khan-led independent rule by the Baro Bhuiyans for a few centuries. From that point of view, the choice of Sonargaon, five kilometres west of the river port and district town of Narayanganj, as a World Craft City is quite apt.

It's only those who know the eventful past of muslin and 'Jamdani' saris can fully realise the appropriateness of Sonargaon as world craft centre or 'city'. The coveted recognition comes from the World Craft Council (WCC).

It follows a joint appeal by the Bangladesh Folk Art and Crafts and Bengal Foundation to the WCC seeking the recognition for Sonargaon, a once-bustling locality adjacent to the old course of the mighty Brahmaputra River. They sought spotlight on the 'Jamdani' product and the intricate style of weaving of the fabric.

Incidentally, Sonargaon is also known for its Folk Art and Craft Museum, and the renovated ruins of a 2-century-old merchants' colony called Panam Nagar.

Officially terming Sonargaon a 'World Craft City' is no routine exercise. For, the recognition also centres around the world-famed Bangladeshi 'Jamdani' sari's being honoured with the GI (geographical indication) tag in 2016.

Experts dealing with the country's handicraft products and the crafts people's skill hope the WCC recognition to Sonargaon and the 'Jamdani sari' will open a wide horizon of opportunities and global openings before Bangladesh.

Among others, this will, likely, enable the country to enjoy scopes for exchanging cooperation and partnership with the other 'world craft cities'.

They are located in India, China, Thailand, Iran --- and even distant countries like Denmark. The products are varied like the countries' marvellous cultural differences. They range from stone carvings, natural indigo dying, ceramic products to handmade pottery.

Except for stone carvings, Bangladesh has long been taking pride in almost similar handicrafts.

Coming to fabric, this country has been producing silk cloths for centuries --- the finished products being saris and 'panjabis' for men. The coarse cotton fabric woven by the indigenous women in the Chittagong Hill Tracts and the greater Sylhet region, terracotta objects, wood carvings etc deserve to be in the WCC list prominently.

Apart from private organisations, appeals for the inclusion of the products' places of origin in the list could be made by the government and semi-government bodies. No wonder that cotton dresses, traditional jewellery, men's wear, folk musical instruments etc continue to attract people along with their sites of birth.

Like the independent provincial territory of Sonargaon, ruled by three Sultans from 1338 to early Mughal period and free of Delhi-based imperial dominance, the other aspiring Bangladeshi craft cities had better be given recognition by the WCC.