The daughter who carried the torch for her father 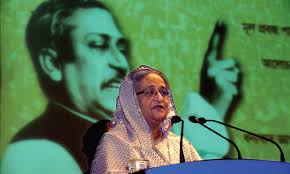 When Sheikh Hasina was born in Tungipara in 1947, her father Sheikh Mujib was a 27-year-old student leader. He had just landed in Dhaka, a provincial capital of a new nation carved out of the British colony. Back then, it was not possible for Mujib, a busy fervent student of Dhaka University, to anticipate in his wildest dreams that one day the eldest daughter of his five children would bear, single-handedly, all the legacies of his political career.

Even up till August, 1975, Sheikh Hasina, a 28-year-old was settled into a life of a regular housewife, married to a nuclear scientist. She had embraced the tranquil, peripheral life of a Bengali woman, but a tragedy of epic scale befell the entire family. The events of the next few months would set the course of her career in a direction that would entangle her fate with the destiny of a nation.

Yet, it was no wonder Sheikh Hasina remained close to Mujib during his entire political career. When Mujib was rising as a leader of a nascent political party, initially, named as Awami Muslim League, which soon would shed the middle-term "Muslim", Hasina stayed in Tungipara with her mother and younger brother Sheikh Kamal. She was growing up in the same environment her father spent his childhood. She bathed in the same river her father had bathed. Later, in a book titled, "Sheikh Mujib My Father", Sheikh Hasina wrote in reminiscence: "My father spent his childhood sporting in the river in Tungipara, playing in the dusts of its pastures. He would embrace the mud and dirt… He liked to spend all his days playing around with the village kids in the close proximity of nature."

During these days, Mujib started to embrace brief imprisonments, which sometimes lasted for weeks. During the intervals he would go to Tungipara to see his family. Describing one such encounter, Mujib, in his autobiography, "The Unfinished Memoirs" wrote: "I reached home after five days… Cuddling my neck, the first thing Hachu (Hasina) uttered was, 'Make Bengali a state language, free all the political prisoners.' On February 21, they were in Dhaka, and she was articulating the slogans she heard there. Kamal did not come near me, he stared at me instead. As I was tired, I took to bed… Back in my old place, my same old room 27-28 months later, the days of lonely confinement of prison cells started coming back to me."

When in 1954 Mujib brought his family for the first time to Dhaka and started to stay in Rajani Bose Lane, Mughaltuli, Sheikh Hasina got the first opportunity to have her father in close proximity. It was a crucial time when Bangabandhu was crossing the first stage of his political prominence. The provincial election had just ended and his party's coalition had won a clear majority and was about to form a government in which Mujib was going to be sworn in as a minister.

In his autobiography Mujib wrote about the day: "When I returned home (after a rally in Tangail), I found out that Renu had arrived with the kids a day earlier. She had come to stay with me in Dhaka. She wanted to send the kids to city schools. I was glad as I was living a vagabond's life. She had already taken charge of the house and tidied up everything."

It was a small one-storied house in old Dhaka. The family soon moved to a public residence at Minto Road allotted for the ministers. By then, 34-year old Mujib took charge as a minister of Co-operative and Agricultural department. It was the briefest office tenure, as the provincial government was dismissed by the central government. Sheikh Mujib was arrested. For the next decade and half, the Father of the Nation would embrace a stormy political career during which he embraced frequent imprisonments and he rose to become the central figure behind whom the whole nation rallied. Sheikh Hasina witnessed the unfolding of events from a close proximity. On several occasions, she would hurriedly arrange her father's prison-bound suitcase while police were waiting outside to take Mujib to jail.

In 1961, the family moved to their own house at Road No-32, Dhanmondi. This famous address would later become the center of Bengali's struggle for freedom. Sheikh Hasina, then a teenage girl, has vivid memories of this house. Here she would experience her father hosting important political meetings. She saw many political luminaries of the day. She would peep into the drawing room to eavesdrop on the political debates. She did not have the slightest inkling that these overtures would prepare the foundations of a political future of her own. Indeed, she was there sitting in the crowd of Race course Maidan, where on the 7th March, 1971, the firebrand leader Bangabandhu was delivering his historic speech. When Mujib was being arrested from his residence on the 25th night, she was there in the house.

It was no wonder that Sheikh Hasina would take the helm of the party when it was in disarray after the murder of its supreme leader. And not the party alone, this reclusive daughter took the onus of rebuilding the legacy of her father.