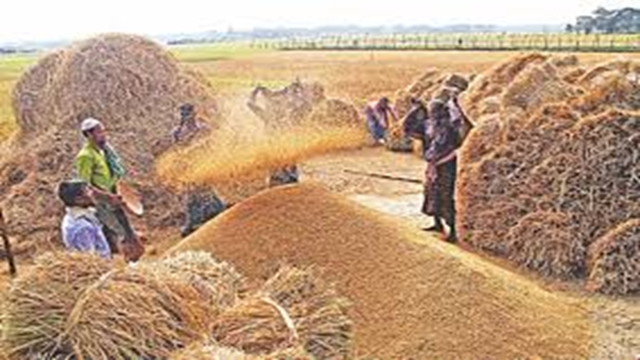 The Department of Agriculture Extension (DAE) on Thursday affirmed that the current boro output would be nearly 2 crore tonnes as the overall crop plantation exceeded the targeted area.

"We are hopeful that the national production would be nearly 2 crore tonnes as the country witnessed surplus boro plantation during this year," said the Director General (DG) of the Department of Agricultural Extension (DAE).

As per the weather forecast, the bad weather would not affect the standing boro crop as 97 per cent harvest already has been completed in the haor areas, said Field Service Wing (FSW) Director of the DAE Abdul Hannan adding that up to 55 per cent crop-cutting also has been finished in the plain land.

The DAE has instructed the farmers to cut their paddy immediately as the boro paddy has been matured up to 80 per cent which would not affect the overall rice quality at all, he mentioned.

The average yield of the country would be much higher as most of the farmers in the northern region already have switched to hybrid boro production from the conventional high yielding variety (HYV), said the DAE official.

The weather department forecasts moderate to heavy rainfall at Dhaka, Mymensingh and Sylhet divisions and light to moderate rainfall at other areas in the region, said Tariqul Islam, meteorologist of Bangladesh Metrological Department. The intensity of the rainfall would declined from the second week of the month, he added.

The DAE recorded partial damages on 60 hectares of lands in the Chalan Beel areas.

However, 11,000 hectares of Boro land in Rajshahi, including in Tanore upazila's Beel Kumari, 9,000 hectares in Naogaon and 721 hectares in Chapainawabganj, have been affected by rainfall and storms, said officials.

DAE Director General Mohammad Mohsin said bad weather delays harvesting in many areas. "We are suggesting growers to harvest the paddy if 80 percent of the crop is ripe," he said.

Md Shahjahan Kabir, director general of Bangladesh Rice Research Institute, said ripe paddy would not be affected even if plants go under water.

Former BRRI DG Jiban Krishna Biswas said yield of crops would not be affected significantly if the crops are lodged after their maturity, but it may affect the quality.