82-km of Meghna River to be 6th hilsa sanctuary 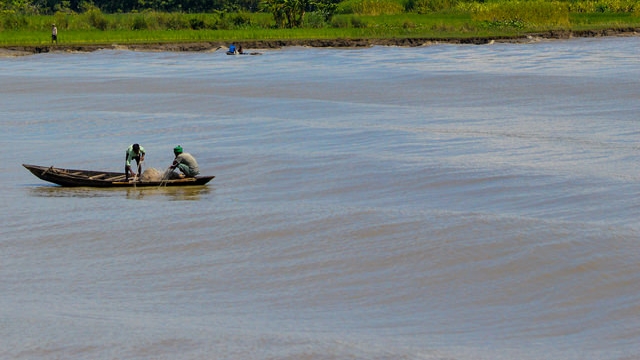 The government is set to announce 82 kilometres of Meghna River as the country's 6th hilsa sanctuary aiming to boost its production.

Hilsa is one of the major foreign exchange earning natural resources.

He said the 6th hilsa sanctuary having 82 kilometre areas would be located in three tributaries of the Meghna River from Hijla to Mehendiganj in Barisal.

Earlier, a pre-gazette draft was published with recommendations to ban catching of hilsa in the areas for two months and now the ministry will declare the country's sixth hilsa sanctuary, the official said.

Dr Yeahya said the production of the national fish increased 1.97 metric tonnes during the last nine years due to the government's sincere efforts.

The production of hilsa has increased about 66 percent in the last nine years, the DG added.

According to the Fisheries and livestock Ministry, the fisheries sector contributes 3.61 percent to the country's Gross Domestic Product (GDP) while hilsa contributes one percent of the total GDP.

Talking to BSS, Department of Fisheries (DoF) director General M Goljar Hossain said recently hilsa production increased in the country due to proper supervision of the ministry, hilsa management strategy of BFRI and strong surveillance of the law enforcement agencies.

He said Bangladesh is now a role model of hilsa production in the world and among the 11 countries where hilsa is found, Bangladesh is the only country where production of this silver fish is on the rise.

According to WorldFish, Bangladesh produces 65 percent of hilsa out of its total production while India produces 15 percent and Myanmar 10 percent. The rest of hilsa production came from the countries adjacent to the Arabian Sea, the Pacific and the Atlantic Ocean.