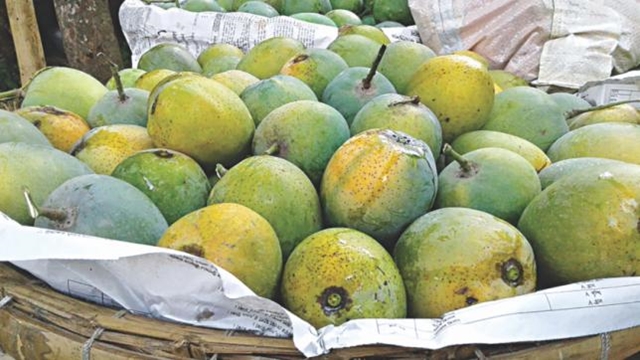 The Khirsapat mango of Chapai-nawabganj, popularly known as himsagar, is set to become the third product after hilsa and jamdani to get the Geographical Indication (GI) tag.

The development comes after the Bangladesh Agricultural Research Institute applied for GI certification for the mango variety in February last year on behalf of the growers of Chapainawabganj, one of the main mango-producing districts.

As per rules, the Department of Patents, Designs and Trademarks (DPDT), which last month gave its preliminary nod, will now wait for two months to see whether anyone has any objection to registration of the fruit as a GI product.

GI is a name or sign used on products to certify that it possesses certain qualities for being made or produced as per traditional methods or enjoys a certain reputation due to its geographical origin.

“As the mango season is about to start, the sooner we get the GI tag the better it will be for our growers as it will enable them to brand their produces well,” said Md Sorof Uddin, senior scientific officer (horticulture) at horticulture research station of BARI in Chapainawabganj.

The intellectual property authority will publish a journal in this regard soon, said an official of DPDT. BARI applied for GI registration for the mango variety with the objective of creating scope for ensuring better prices for growers and increasing the cultivation of mango.

It has also applied for GI registration for the famed mango variety Fazli, grown mostly in the northwest division of Rajshahi.

The bid to get the GI tag for the popular mango varieties comes nearly nine years after India registered Laxman Bhog and Khirsapati (Himsagar) mangoes as GI products of West Bengal.

The neighbouring country also got the GI tag for the Fazli mango grown in West Bengal's Malda.

BARI said Chapainawabganj has history of Khirsapat mango cultivation and the basis of it could be found in the local folk music 'Alkap Gan' dated back to 1955. Besides, the Bangladesh District Gazetteer also mentioned mango orchards in greater Rajshahi district, it added.

The move comes as mango cultivation area is rising along with its production thanks to growing demand for the summer fruit.

BARI scientist Sorof said mango production rose over time for increasing interests of growers for commercial cultivation to cater to the domestic and export markets.

There were only 12 mango producing districts that harvested 2.43 lakh tonnes of the fruit in 2005. Now, the fruit is commercially grown in 23 districts, he said.

“Farmers are increasing acreage as they are making profits,” he said, citing an estimate that the annual market size of mango could be more than Tk 5,000 crore.

The Ashwina variety of mango accounts for one-third the total production, followed by Khirsapat, Amrapali, Fazli, Langra and other varieties, according to the official.

Khirsapat is also grown in Sathkhira, Meherpur and Rajshahi districts and harvesting of the fruit begins in the middle of May and continues until the third week of May, Sorof said.