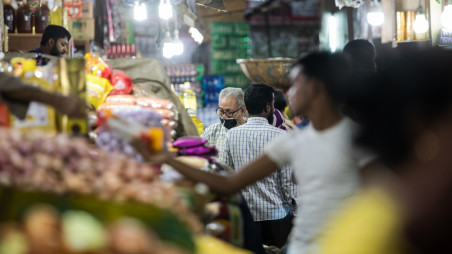 The price of edible oil, flour, and onions has dropped at the wholesale level, but the impact on the retail market has yet to be felt.

According to traders, prices have begun to fall as oil and wheat imports have reopened.

Besides, the price of onions rose for a few days due to the abrupt halt of onion imports from India, but the price has since fallen due to an increase in domestic onion supply.

Palm oil prices have decreased by Tk 5-9 per litre in Shyambazar, Moulvibazar, and other wholesale and retail markets across the capital.

On Wednesday, palm oil was sold at a wholesale price of Tk 161-165 per litre in Moulvibazar.

Meanwhile, loose soybean oil was sold at a wholesale price of Tk 175-177 per litre in the capital's Moulvibazar on Wednesday, down from Tk 178-190 per litre two weeks ago.

Even though the government set the retail price of soybean oil at Tk 180 per litre on May 5, it is still being sold for Tk 190-195 per litre in the capital.

Mohammad Ali Bhutto, vice-president of the Wholesale Edible Oil Traders' Association, said that the announcement of Indonesia's re-export of oil had a positive impact on the domestic market and that prices are gradually falling.

He said, “We are now selling soybean oil at a lower price than the government set wholesale rate of Tk 178 per litre.”

“We expect the price to drop further once the lingering effects of the 20-25-day shipping halt have subsided,” he added.

Besides, onion prices spiked earlier this month following reports of a halt in onion imports from India as well as heavy rains.

The price had increased by Tk 10-15 per kg in the retail market, reaching Tk 50-55 per kg. Similarly, wholesale prices also increased, but at a slower rate.

As the market price has dropped again, wholesale traders in Shyambazar were selling onions for Tk 26-30 per kg on Wednesday, down from Tk 31-32 per kg last week.

Onion prices had risen in the wholesale market, but they have since dropped. The season has only been over for about 15-20 days. There is no logical reason for onion prices to rise now.

The price of flour is also falling in tandem with the price of wheat in the wholesale markets.

However, prices in the retail market have not yet decreased.