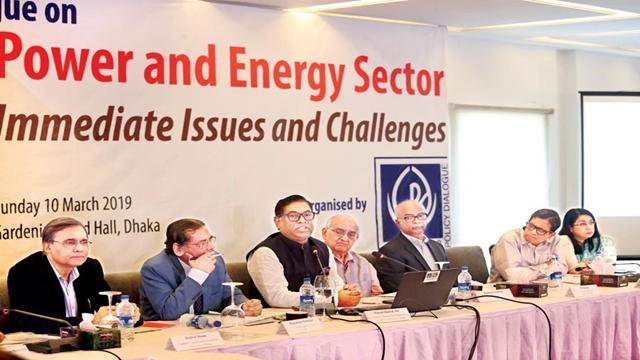 Experts have called for renewed exploration of potential onshore and offshore gas fields to meet the country's future energy demands.

They also felt the need for tackling the prevalent corruption and irregularities in the power sector and a gradual shift towards a market-based tariff system in the energy arena.

Experts on Sunday made the call at a seminar on "The Power and Energy Sector of Bangladesh: Challenges of Moving Beyond the Transition Stage," organised by leading think tank the Centre for Policy Dialogue in Dhaka.

"At the same time, it needs to reduce the lack of transparency, accountability, efficiency, irregularities and corruption," he added.

He was presenting the keynote paper at the event.

The keynote paper called for immediate discontinuation of 'Speedy Supply of Power and Energy Act", adding that the sector should gradually return to the operation under the public procurement act and rules as the period of emergency needs is over.

"It is high time we pay attention to the primary energy sector particularly domestic gas and coal," Dr. Moazzem said.

"There should be a clear idea about the gas reserves of the country. At the same time, the government should make it clear about the plan to use domestic coal reserves," he added.

The CPD researchers also called for gradual shift in energy pricing mechanism from the administered tariff to market-based pricing.

For example, Dr. Moazzem said, energy tariff should not be biased towards the power sector.

On the other hand, the equity issue needs to be taken into account in case of SMEs, agriculture, low income households, he said.

"As an institution, the Bangladesh Energy Regulatory Commission (BERC) needs to be independent in taking decisions," he added.

The keynote paper called for gradual withdrawal of all sorts of inefficient activities.

"Energy mix should ensure supply of energy and power at reasonable tariffs and with good quality. Priority should be given on using domestic resources including gas, coal and renewable energy, the CPS researchers said.

Experts at the event called for renewed exploration of gas in the country to cut the country's dependence on imported fuel.

"Within the next 10 years, 90 per cent of energy in the country will be imported and the cost of energy import will be huge. As a growing economy, can we afford to have such a huge import bill?" said Dr. M Tamim, pro-vice chancellor of BRAC University.

"So, my suggestion would be to go local as much as possible. We should also go for exploring and exploiting our own coal. That will give us lots of energy independence and freedom," he added.

Dr. Tamim noted although the issue of maritime boundary has been resolved years ago, the country has not yet been able to do any survey of its maritime resources.

"There is a wrong notion among the policy makers that Bangladesh is going out of its gas reserves and we have to go for the import of coal and LNG," said Professor Badrul Imam, Professor of Geology of Dhaka University.

But the reality is that Bangladesh is the least explored area in terms of onshore and offshore gas exploration among the world's petroleum-rich basins," he said.

"We did find huge amount of gas fields back in the 1960s when Chevron discovered a number of large gas fields. But we have remained stuck to that over the decades," he argued.

Speakers at the event identified 'conflict of interest' among the policy makers as a major hindrance to the flourishing of power sector in the country.

"It is not possible to make people-friendly law in a country where the majority of the lawmakers are businessmen," said Professor Dr. M Shamsul Alam, Dean of Daffodil University.

"At the same time, it is impossible to maintain integrity of a system if all the executive positions of the state-owned companies are occupied by top bureaucrats," he added.

Chairman of the CPD Professor Rehman Sobhan in his speech called for ensuring greater transparency in the energy sector to ensure speedy and efficient implementation of projects.

Noting that large infrastructure projects in the country often suffer from cost and time overrun, Professor Sobhan said that the government should have comparative indicators from competing countries like Vietnam, India or Sri Lanka to get a picture about the possible cost and timeframe of a particular project.

Speaking on the occasion, state minister for power, energy and mineral resources Nasrul Hamid noted Bangladesh is not yet ready for the market-based energy tariff.

"Our market is not smart enough to go for the market-based pricing," Mr Hamid said.

He also said the process of offshore exploration has already started but the scheme is advancing slowly as it is a 'challenging' task.

"Offshore exploration has been in the slow lane. This is because a number of companies left the scheme midway due to the fall in global gas price," he added.

He also noted the government has taken several initiatives to import hydro-electricity from Nepal and Bhutan.

"Import of electricity from India has already started while initiatives have been taken to import power from Nepal and Bhutan," he said.

"Our target is to import 2,000 megawatts of power from the neighbouring countries," he added.

Additional Secretary Siddique Zobair, in his speech, said although, the country has attained a certain level of electricity sufficiency, the core issue now is quality, reliability, sustainability and affordability.

"Energy efficiency is particularly important to decrease our energy intensity per GDP," he pointed out.

Mr. Zobair also said wind energy has some significant potential in Bangladesh, especially in the southern region of the country.